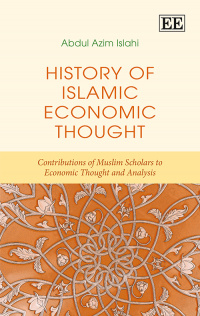 Contributions of Muslim Scholars to Economic Thought and Analysis

Early chapters outline the foundations of Islamic economic thought and describe three distinct phases of its development over time. The author then identifies key theories and tenets of modern economics – including value; market and pricing; production and distribution; money and interest; and the economic role of the state – and explores the influence of Muslim scholarly thought on each. The concluding chapter highlights the importance of further exploration of the topic and offers insightful recommendations for future research.

This fascinating book will be of great interest to students and scholars of both the history of economic thought and Islamic economics.
Critical Acclaim
‘For those who wish to dig deeper into what Islam has to say about important topics such as these and beyond, Islahi’s book is a valuable resource. It is especially rewarding for those who wish to trace how principles of Islamic economics were absorbed by Muslim scholars, and how they played a role in modern, mainstream economics. Islahi is a master of the subject, and his arguments are compelling. . . . Readers will be left with two takeaways from this book. First, the contribution of Muslim scholars to modern economics is under acknowledged in a manner that goes beyond the broad-based under acknowledgment of the antecedents of Classical economics. Second, regardless of one’s religious persuasion, the Quran and the Sunnah contain novel economic principles that merit consideration by all policymakers.’
– Omar Al-Ubaydli, Journal of the History of Economic Thought​