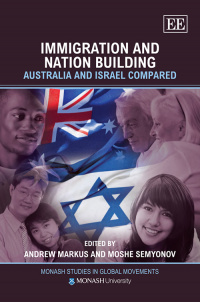 More Information
Critical Acclaim
Contributors
Contents
More Information
This insightful study explores the growth of the two largest post-industrial immigrant nations since the Second World War – Australia and Israel. Almost one in four Australians were born outside the country, more than one in three Israelis.

Immigration and Nation Building brings a comparative approach to the discussion of patterns of immigration, legal structures, the labour market, civil society, public opinion, and integration of the second generation. The result is a thought provoking analysis of the distinctive and universal in the development of two immigrant nations.

By comparing the experiences of these two countries, this ground-breaking study of immigration and its impact will appeal to policy analysts and researchers in government and academia, as well as students in the areas of sociology, politics, economics and history.
Critical Acclaim
‘. . . the book is an important study on immigrants in Australia and Israel in the twentieth century, and has important implications for social policy formation, immigration policy, and the creation of a sense of nationhood in these two diverse countries, even as both of them signify the need for convergence and adoption of a humane approach to the sensitivities of migrant polulations. The book is thus a welcome addition to the existing literature on immigration, and would prove useful to researchers of social and political policies. The presentation, production and editing of the book are also of appreciable quality, and overall the book offers stimulating reading at an affordable price.’
– Biswajit Chatterjee, The Indian Journal of Labour Economics

‘Immigration and Nation Building examines a dilemma shared by Israel and Australia with many other countries: they are nations of immigrants, but continued immigration introduces fractures and inequalities that could undermine the sense of nationhood. Systematic comparisons across many dimensions help the reader to view each country’s experience from a new perspective. The analyses here provide a solid basis for addressing the underlying policy questions: Whose Israel? Whose Australia?’
– John R. Logan, Brown University, US

‘This book provides a comprehensive perspective on the role of immigration in nation building. It does so not only through the demographic change that migration brought about, but by revealing how immigration impacted on major spheres of life in both Australia and Israel. The central focus on the comparative perspective makes this book distinctive. Rather than providing parallel stories of two societies, the chapters are structured in a way that specifically fleshes out similarities and differences in major areas of immigration policy and immigrant incorporation. It should appeal to students of international migration as well as those interested more directly in understanding Australian and Israeli societies.’
– Noah Lewin-Epstein, Tel Aviv University, Israel

‘This is a concise yet comprehensive analysis of the role of immigration in the nation building of Australia and Israel. With contributions by leading scholars and a thoughtful examination of recent data and research the book provides an important contribution to the study of immigration in each society, while also convincingly demonstrating the benefits of comparative cross-national analysis. It deserves to be widely read by social scientists and others who are interested in the factors that have shaped Australian and Israeli societies and who also want to understand how immigration continues to be central to their future development.’
– Mark Western, The University of Queensland, Australia
Contributors
Contributors: M. Al-Haj, K. Amit, O. Bagno, A. Borowski, N. Carmi, A. Daly, S. DellaPergola, Y. Haberfeld, A. Jakubowicz, S.-E. Khoo, S. Kneebone, A. Markus, R. Raijman, M. Semyonov, H. Stier
Contents
Contents: