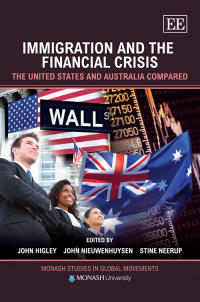 Immigration and the Financial Crisis

The United States and Australia Compared

More Information
Critical Acclaim
Contributors
Contents
More Information
Structural needs for immigrant labour in health care, restaurant, tourism, agricultural and other economic sectors, together with harsher economic circumstances in most sending countries, almost certainly ensure the continuation of large-scale immigration to the US and Australia. But in harder times, especially in the US, sustaining this immigration while managing immigrants’ economic and social integration are daunting tasks. This illuminating book analyses how well, and in what ways, the US and Australia will meet these challenges.

This companion volume to Nations of Immigrants examines immigration to the US and Australia during the difficult economic times following the paralysis of financial firms and markets in New York and London in autumn 2008, quickly affecting Australia and most other OECD countries. The contributors – prominent American and Australian immigration specialists – discuss how the financial crisis has altered the nexus of domestic labour markets and immigration, how public fears spurred by harder times are affecting border protection and support for immigration, whether serious abrasions between foreign- and native-born populations are resulting, and the extent to which the politics of immigration is being transformed.

Immigration and the Financial Crisis will prove a thought provoking read for academics and students with an interest in immigration, and American and Australian policy arenas. The book will also prove an invaluable reference tool for public servants engaged in administering US and Australian immigration policies.
Critical Acclaim
‘This book is a valuable addition to the literature on contemporary immigration trends in the US and Australia and the role of economic factors in influencing these trends. The various chapters show that economic migrants are affected by, and respond to, changes in labour market conditions, but specific outcomes vary and are also dependent on other (non-economic) factors. Similarly, other factors besides economic conditions determine immigration policies and politics in the two countries. The book’s narratives and empirical analyses of what happened to immigration and immigrants during the financial crisis years of 2008–2009 in the two countries constitute an important record of the two countries’ immigration experience during those years.’
– Siew-Ean Khoo, Journal of Population Research
Contributors
Contributors: L. Baldassar, F.D. Bean, S.K. Brown, J. Collins, R.G. Cushing, G.P. Freeman, J. Higley, G. Hugo, D.L. Leal, P. Mares, P. Martin, S. Neerup, J. Nieuwenhuysen, S.M. Tendler
Contents
Contents:

4. Latinos, Immigration and the US Recession
David L. Leal

8. Immigration Status and Jobs Lost During the US Recession of 2007–09
Robert G. Cushing

10. Harder Times and Meaner Politics in the US, but Mass Immigration Keeps Rolling Along
Gary P. Freeman and Stuart M. Tendler