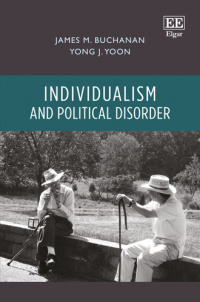 9781784710576 Edward Elgar Publishing
The late James M. Buchanan, 1986 Nobel Laureate in Economics and Professor Emeritus, George Mason University and Yong J. Yoon, Associate Professor, George Mason University, US
Publication Date: 2015 ISBN: 978 1 78471 057 6 Extent: 168 pp
Inspired by F.A. Hayek’s Individualism and Economic Order, this book also stands in contrast to the themes of that work, by emphasizing that collective action works differently from the way the market works. The chapters comprise papers written by James M.Buchanan, both with and without Yoon’s co-authorship, after the publication of his Collected Work volumes. These chapters reflect the authors' thoughts on politics, seen through the lens of fiscal policy and the tragedies of the commons and anti-commons in collective action. The pathologies of democratic politics rigorously analyzed in the book prove the relevance of Buchanan's constitutionalism

More Information
Critical Acclaim
Contents
More Information
Inspired by F.A. Hayek’s Individualism and Economic Order, this book, edited by Yong Yoon, stands in contrast to the themes of that work by emphasizing that collective action operates differently from the way the market works. The chapters comprise papers written by James M. Buchanan, both with and without Yoon’s co-authorship, after the publication of his Collected Works.

In this book, the authors analyze political disorder that is caused by individualism and self-interest in democracy, focusing specifically on the American political commons. Buchanan and Yoon expertly examine a variety of topics within this theme: the public choice approach to political disorder, rigorous economic models, the dysfunction of American fiscal institutions, the psychological aspects of political rules, and Fukuyama’s vetocracy as a case of anti-commons.

Readers will gain many new insights from Individualism and Political Disorder, and it will prove invaluable for academics and students in an array of areas, such as economics, politics, public policy and public administration, social psychology, and law and economics.

Critical Acclaim
‘This book is highly recommended to those interested in political economy and public economics. It contains gems from a two-decade collaboration that was both productive and relevant to the political economy of our times. And, like with other works of Buchanan, the reader walks away with a deeper understanding of the systemic reasons for dysfunction, and reasons for hope in constitutional change of the rules of the game that will be able to fix the dysfunctions previously diagnosed.’
– Peter J Boettke, Œconomia

‘In these creative and imaginative essays, James M. Buchanan and Yong J. Yoon explore new analytical territory by explaining how democratic politics can generate economic disorder. While some of these themes are present throughout Buchanan’s scholarly oeuvre, these essays break new analytical ground by examining the ability of democratic processes to promote destructive outcomes in the absence of appropriate constitutional restraints on democratic action. These articles and excerpts will repay careful study by all scholars interested in the relationship between democracy, liberty, and economic progress.’
– Richard E. Wagner, George Mason University, US
Contents
Contents: Foreword Roger Congleton PART I INTRODUCTION Introduction: Political Disorder and Decay PART II ANALYSIS AND APPLICATION 1. Majoritarian Logic 2. Rationality as Prudence: Another Reason for Rules 3. The Efficacy of Arbitrary Rules (Buchanan and Yoon) 4. Variations on Tullock's Road Model 5. Symmetric Tragedies: Commons and Anti-commons 6. Majoritarian Management of the Commons 7. Universalism through common access: an alternative model of distributive politics 8. Majoritarian Exploitation of Fiscal Commons: General Taxes -Differential Transfers 9. All Voting is Strategic 10. Public Choice and the Extent of the Market 11. Choosing for Others: A Neglected Element in the Theory of Collective Action 12. The Cost of Collectivization, Per Se PART III: AMERICA’S FISCAL TRAGEDY 13. Institutional Sources of American Fiscal Tragedy Index