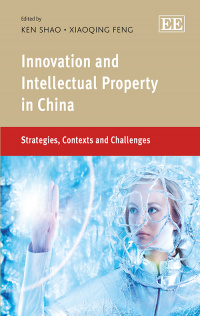 Innovation and Intellectual Property in China

9781781001592 Edward Elgar Publishing
Edited by Ken Shao, Professor of Law, University of Western Australia and Xiaoqing Feng, Professor of Law, China University of Political Science and Law, Beijing, China
Publication Date: 2014 ISBN: 978 1 78100 159 2 Extent: 288 pp
China is evolving from a manufacturing-based economy to an innovation-based economy, but the delicate context behind this change has not been properly understood by foreign governments, companies and lawyers. This book is an insightful response to ill-conceived notions of, and mis-assumptions regarding, the Chinese innovation economy. It represents an effort to marry a variety of ‘insiders’ perspectives’ from China, with the analysis of international scholars.

More Information
Critical Acclaim
Contributors
Contents
More Information
China is evolving from a manufacturing-based economy to an innovation-based economy, but the delicate context behind this change has not been properly understood by foreign governments, companies and lawyers. This book is an insightful response to ill-conceived notions of, and mis-assumptions regarding, the Chinese innovation economy. It represents an effort to marry a variety of ‘insiders’ perspectives’ from China, with the analysis of international scholars.

With contributions from leading authors - including Dr Kong Xiangjun, President of the Intellectual Property Tribunal at the Supreme People’s Court of China - this book is the first comprehensive response to a highly controversial and largely under-developed field of inquiry. It seeks to unveil and understand the complexities and challenges that confront China’s innovation economy, setting out the cultural and historical context, the strategies that form the basis for this evolution, and the measures China has at its disposal to protect intellectual property.

The book will be hugely valuable to all those who have interest in China’s development, and seek to understand the likely path of China’s future economic models and legal reforms. Offering a holistic perspective combining global, domestic and cultural-historical spectrums, it will also prove a key resource for Intellectual property scholars and lawyers.

Critical Acclaim
‘This book shows clearly that the Chinese IPR law is at the service to the ascension of Chinese high-tech industries and its building up of innovation capacity. The Chinese culture and history, in this context, sounds much like a justification to the proactive Chinese industrial policies that guiding the Great Leap Forward of Innovation.’
– Cairn.info

‘This is an important addition to the growing volumes of literature on Chinese intellectual property law. The book provides an excellent selection of essays written by well-known academics and policy makers that sheds light on the process of innovation shaped by national policies and makes readers re-think the role of law in fostering innovation. This is a must read for those who wonder to what extent the stereotypical image of China as the intellectual property norm receiver still holds true.’
– Nari Lee, Hanken School of Economics, Finland

‘This book is jointly created by leading experts from China, Australia, the US, UK and Ireland. Working in academic, governmental and judicial sectors, these authors navigate the topics from the wide realms of law, economics, international relations, government policies, practical issues, industrial fieldworks and comparative studies. The study is very detailed and unique, and presents a fresh, holistic and international study of the contexts and specifics of China’s innovation policies, intellectual property strategies and industrial development trends, which as a whole, may remain largely unknown. Western readers who are interested in China’s knowledge-based economy should not miss out on this authoritative book.’
– Liu Chuntian, President, China Intellectual Property Law Society, Dean of Intellectual Property School, Renmin University of China, Beijing

'This innovative book is essential reading for those who are interested in China’s IP and innovation strategies. A lot has been written about China’s IP laws and their rapid evolution over the last two decades. China is also developing a national innovation strategy and the substantial merit of this book is that it offers an in-depth analysis of both those elements and, even more importantly, of the way in which they interact. That latter aspect is needed, but found rarely.'
– Paul Torremans, University of Nottingham, UK

6. The Cluster Effect in China: Real or Imagined?
Michael Keane

9. Intellectual Property, Innovation, and the Ladder of Development: Experience of Developed Countries for China
Wei Shi