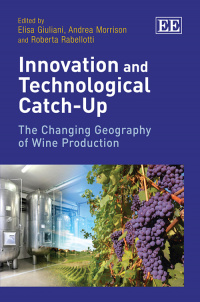 The Changing Geography of Wine Production

9780857937674 Edward Elgar Publishing
Edited by Elisa Giuliani, University of Pisa, Italy and SPRU, University of Sussex, UK, Andrea Morrison, University of Pavia, Italy and Roberta Rabellotti, Università degli Studi di Pavia, Italy
Publication Date: March 2013 ISBN: 978 0 85793 767 4 Extent: 232 pp
Since the beginning of the 1990s, the supremacy of ‘Old World’ countries (France and Italy) in the international wine market has been challenged by new players, such as Australia, Argentina, Chile and South Africa, which are recording stunning performances in terms both of export volume and value. This book demonstrates that such a spectacular example of catch-up goes beyond simply copying new technologies; it entails creative adaptation and innovation, and introduces a new growth trajectory in which consistent investments in research and science play a key role.

More Information
Critical Acclaim
Contributors
Contents
More Information
Since the beginning of the 1990s, the supremacy of ‘Old World’ countries (France and Italy) in the international wine market has been challenged by new players, such as Australia, Argentina, Chile and South Africa, which are recording stunning performances in terms both of export volume and value. This book demonstrates that such a spectacular example of catch-up goes beyond simply copying new technologies; it entails creative adaptation and innovation, and introduces a new growth trajectory in which consistent investments in research and science play a key role.
Critical Acclaim
‘This excellent book emerges out of the project “Innovation and Globalization in the Wine Sector: An International Comparison between Argentina, Chile, Italy and South Africa”. The authors provide a fresh perspective on innovation and technological capabilities in the wine industry, as well as an insightful account of the new growth trajectories of this industry in different contexts. . . this theoretically informed and empirically rich collection has clearly succeeded in highlighting some of the key features of innovation and technological catching-up in the wine industry in different countries. . . The book will be of considerable interest to practitioners, policymakers and scholars of innovation processes and to specialists of the wine industry more generally.’
– David Doloreux, Regional Studies

‘. . . the editors have produced a book that contributes to our knowledge of the significance of innovation for the success of the New Wine World countries. It helps us to better understand the drivers of the most recent episode of wine grape area expansion and wine production growth. . . the book deserves a place on the shelves or data files of sociologists, geographers, economists, and policymakers concerned with the evolution of the global wine industry.’
– Rolf A.E. Mueller, Journal of Wine Economics

‘This book overturns the old paradigm ideas about natural-resource-based activities. It sheds light on the new opportunities for technological dynamism and catching-up by using science to open novel directions in traditional sectors. It should become a classic in what I expect will be a very important academic debate and a new trend in development policy.’
– Carlota Perez, Tallinn University of Technology, Estonia, Cambridge University and University of Sussex, UK

‘This excellent book provides a deep understanding of why and how emerging countries are able to catch-up and enter international markets in an industry that once was considered as traditional, but which has now become a relatively articulated and science-based sectoral system.’
– Franco Malerba, KITeS, Bocconi University, Italy

‘This excellent book demonstrates better than any other I know the strengths and limits of the concept of a national system of innovation for understanding economic development today. Any careful student of innovation or development will want to read it.’
– Charles Sabel, Columbia Law School, US

‘In the New World, viticulture and wine production has had to develop with verve and enthusiasm, to be able to survive and to flourish. In countries like Chile and Argentina, the continuing decline of domestic wine consumption has forced technicians and entrepreneurs to conquer the world with innovation and technology, to produce wines of international taste and to attract potential buyers to these markets. This book is a very professional account of these phenomena, which have profoundly changed the marketing of wines in the past 20 years.’
– Aurelio Montes, President of Viña Montes, Chile

‘This book takes a fresh look at the innovations that have changed the global wine sector, presenting established thinking in a new light. Building on the world’s knowledge base in wine production, the book encourages novel thinking for both Old World and New World producers. The content is topical, current and well written. This is a must-read for anyone with an interest in wine innovation.’
– Sakkie Pretorius, The Australian Wine Research Institute
Contributors
Contributors: K. Anderson, L. Cassi, R.A. Corredoira, L. Cusmano, E. Giuliani, M. Kunc, J. Lorenzten, G.A. McDermott, A. Morrison, R. Rabellotti, S. Tiffin
Contents
Contents:

PART I: CATCHING UP IN THE WINE INDUSTRY
2. Catching-up Trajectories in the Wine Sector
Lucia Cusmano, Andrea Morrison and Roberta Rabellotti

6. Recombining to Compete: Public–Private Institutions, Shifting Networks and the Remaking of the Argentine Wine Sector
Gerald A. McDermott and Rafael A. Corredoira

7. Bridging Researchers and the Openness of Wine Innovation Systems in Chile and South Africa
Elisa Giuliani and Roberta Rabellotti

9. What Have we Learnt from the Wine Industry? Some Concluding Remarks
Elisa Giuliani, Andrea Morrison and Roberta Rabellotti