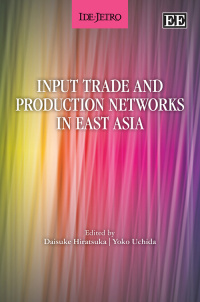 More Information
Critical Acclaim
Contributors
Contents
More Information
Intermediate input trade is regarded as an important contributory factor in explaining the increase in world trade in recent years. This timely book presents, for the first time, meticulous empirical analyses of the growth of input trade, and includes detailed studies that capture the main features and characteristics of production networks in East Asia.

Intermediate input trade has grown markedly in East Asia, and at a much faster rate than in the rest of the world. Since the early 1990s, when technological developments made it possible to separate the production process into many stages, East Asia as a region has developed sophisticated production networks in the manufacture of various products. Different countries have installed production stages according to their levels of technology or factor endowments, and consequently sequential production stages are now located across various countries. In order to produce final goods, East Asian nations have therefore relied on the trade of inputs back and forth.

Containing unique and important data, this book will appeal to academics, researchers and policymakers interested in trade, economic integration and Asian studies.
Critical Acclaim
‘Spatial fragmentation of production is linked with two great waves of unbundling. The first one was a century and a half ago when the spatial location of production of goods was separated from their consumption. We live in the age of a second unbundling where certain operations within the same factory can be fragmented and performed elsewhere. There is trade in certain tasks and components which was made possible by cheaper and better communication and transport. This book considers production networks in East Asia, which is and will continue to be the most dynamic economic region in the decades to come.’
– Miroslav N. Jovanović, University of Geneva, Switzerland

1. The Development of Input Trade and Production Networks in East Asia
Daisuke Hiratsuka and Yoko Uchida

2. Vertical Specialization: Some Evidence from East Asia from 1975 to 2000
David Hummels and Yoko Uchida

3. Some Evidence on the Nature and Growth of Input Trade
David Hummels and Laura Puzzello

8. The Spatial Structure of Production/Distribution Networks and its Implication for Technology Transfers and Spillovers
Fukunari Kimura