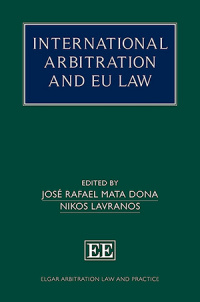 9781788973991 Edward Elgar Publishing
Elgar Arbitration Law and Practice series
Edited by José Rafael Mata Dona, Independent Practitioner, D.E.S. in European and International Law, and member of the Brussels and Caracas Bars and Nikos Lavranos, Guest Professor of International Investment Law, Free University of Brussels, Belgium, Secretary-General of the European Federation for Investment Law and Arbitration (EFILA), founder of NL-Investmentconsulting, Of Counsel at Wöss & Partners
Publication Date: 2021 ISBN: 978 1 78897 399 1 Extent: 616 pp
This book examines the intersection of EU law and international arbitration based on the experience of leading practitioners in both commercial and investment treaty arbitration law. It expertly illustrates the depth and breadth of EU law’s impact on party autonomy and on the margin of appreciation available to arbitral tribunals.

More Information
Critical Acclaim
Contributors
Contents
More Information
This book examines the intersection of EU law and international arbitration based on the experience of leading practitioners in both commercial and investment treaty arbitration law. It expertly illustrates the depth and breadth of EU law’s impact on party autonomy and on the margin of appreciation available to arbitral tribunals.

• an analysis of the relevance of EU law on the validity of international agreements to arbitrate
• consideration of the impact of EU law on challenges, recognition and enforcement of international commercial awards, and the relationship between anti-suit relief, EU law and the New York Convention
• a discussion of selected areas of intersection between EU law and international commercial arbitration, including the ECtHR, consumer protection, damages, competition damages, GDPR, commercial agency and others
• an introduction to the complex areas in which the EU regime and international investment arbitration laws intertwine, through a review of the development of the EU’s investment policy
• an examination of the impact of EU law on specific issues in international investment arbitration including the Energy Charter Treaty, procedural issues (both ICSID and non-ICSID), damages, taxation, and the proposed Multilateral Investment Court
• an appraisal of the potential of International Commercial Mediation and its interrelations with EU law.

International Arbitration and EU Law is a specialist guide for arbitrators, lawyers, judges, and expert witnesses. It will also greatly benefit academics and advanced students working, researching or teaching international arbitration law.
Critical Acclaim
‘A treasure trove for those, practitioners and academics alike, having to tackle any issue involving international commercial arbitration as well as investment arbitration that may have a link to Europe.’
– Franco Ferrari, New York University School of Law, US

‘The relationship between EU law and international arbitration is extremely complex, especially for those who have never practiced EU law. This collection is a tremendous contribution to understanding why the two regimes increasingly overlap, and how (or whether) they can be reconciled. It is especially useful to understanding the evolving relationship between investment arbitration and EU law, which will certainly continue to be much discussed in the context of investment law reform and investor-State disputes. Readers who follow these discussions will be very well served by this volume.’
– Meg Kinnear, Secretary General of ICSID

‘International Arbitration and EU Law is a tour de force that stands out among other publications in the sector. It features leading arbitration practitioners and academics as authors and covers, in the broadest possible manner, important topics at the intersection of international arbitration and EU law. A must for everyone working in this field.’
– Maxi Scherer, WilmerHale and Queen Mary University of London, UK