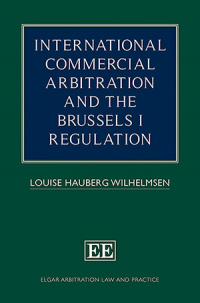 International Commercial Arbitration and the Brussels I Regulation

9781788115049 Edward Elgar Publishing
Elgar Arbitration Law and Practice series
Louise Hauberg Wilhelmsen, Senior Legal Advisor, Danish Ministry of Justice, Denmark
Publication Date: 2018 ISBN: 978 1 78811 504 9 Extent: 288 pp
The Brussels I Regulation, which ensures the free circulation of judgments within the EU, was recently revised; one of the main issues addressed was whether the Regulation affects the efficient resolution of international commercial disputes through arbitration within the Union. This book provides an in depth examination of the interface between the Regulation and international commercial arbitration. The author demonstrates that the consequences of this interface can encourage the use of delaying tactics, hampering the efficient resolution of international disputes.

More Information
Critical Acclaim
Contents
More Information
This new work provides a timely and in-depth examination of the interface between the recast Brussels I Regulation and international commercial arbitration.

The nature of the exclusion of arbitration from the original Brussels I Regulation on the recognition and enforcement of judgments, and subsequent decisions of the CJEU in cases such as West Tankers, resulted in the use of delaying tactics by parties wishing to avoid arbitration agreements.

The recast Brussels I Regulation sought to remedy the situation by clarifying the extent of the arbitration exclusion and providing further detail on the relationship between arbitration and the Regulation, with the aim of promoting the efficient resolution of international disputes within the European Union. While the recast Brussels I Regulation has gone some way to remedy the situation, problems remain for those engaged in international disputes in EU member states.

Key features of this book include:

• Examination of the dilatory tactics which may be employed to avoid arbitration such as forum shopping, commencing parallel proceedings and obtaining conflicting decisions

• Assessment of the EU, international and national laws that apply to these tactics.