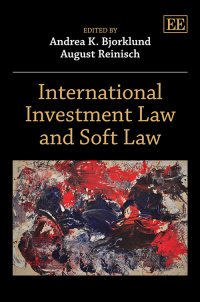 It draws together the views of international experts on the use of soft law in international law generally and in discrete fields such as WTO, commercial, and environmental law. The book assesses whether investment law has sufficiently coalesced over the last 50 years to be ‘codified’ and focuses particularly on topical issues such as most-favoured-nation treatment and expropriation.

This timely book will appeal to academics interested in the development of international law and legal theory, to those working in investment law, government investment treaty negotiators and arbitration practitioners.
Critical Acclaim
‘. . . a text that should be useful and interesting to readers outside the international investment community, and which is an excellent primer on soft law and its usefulness in international problem solving generally.’
– Nicholas Turner, American Society of International Law

‘. . . the book covers an exceptionally wide range of issues in the process of examining the topic of investment law and soft law. If you’re involved in investment law, or government investment treaty negotiations, or arbitration proceedings – or if you have an interest in international law and legal theory, you would do well to acquire this erudite and timely work of reference.’
– Phillip Taylor MBE and Elizabeth Taylor, The Barrister Magazine

8. The Evolution of Investment Protection Based on Public International Law Treaties: Lessons to be Learned
Christian Tietje and Emily Sipiorski

9. Is the MFN Principle in International Investment Law Ripe for Multilateralization or Codification?
Andreas R. Ziegler

10. Is Expropriation Ripe for Codification? The Example of the Non-Discrimination Requirement for Lawful Expropriations
August Reinisch

The Sources of WTO Law and their Interpretation

Protection of Foreign Investments in an Intra-EU Context