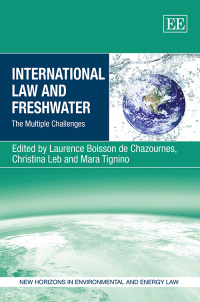 More Information
Critical Acclaim
Contributors
Contents
More Information
The issues surrounding water embody some of the greatest challenges of the 21st century. The editors of this timely book have brought together the leading authors in the field to explore the key questions involving international law and water governance.

International Law and Freshwater connects recent legal developments through the breadth and synergies of a multidisciplinary analysis. It addresses such critical issues as water security, the right to water, international cooperation and dispute resolution, State succession to transboundary watercourse treaties, and facets of international economic law, including trade in ‘virtual water’ and the impacts of ‘land grabs’.

Containing detailed analysis and thought-provoking solutions, this book will appeal to researchers and academics working in the legal field, as well as international relations and natural sciences. Water practitioners, public officials, diplomats and students will also find much to interest them in this insightful study.
Critical Acclaim
‘Freshwater is an essential resource. This book offers a comprehensive international look at diverse issues arising from water use for human consumption, agriculture, energy, industry, waste disposal and ecosystem conservation. The contributions, written primarily but not exclusively by legal experts, are highly informed and insightful. In addition to more traditional topics, they address the WTO and natural resources, Ethiopia’s large-scale commercial farms, and aquifer management in the Geneva region and Latin America. An important read for scholars, policy-makers, and concerned citizens.’
– Edith Brown Weiss, Georgetown University, US

‘This excellent book covers the important legal and political perspectives on the world’s freshwater resources. The chapters, written by distinguished experts from academia and practice, systematically address issues of economics, environment, sovereignty over resources, energy, conflict resolution, and in addition offer some in depth case studies. A wonderful book and compulsory reading for who needs to have the full picture of the complex international dynamics of freshwater in our time.’
– Catherine Brölmann, University of Amsterdam, The Netherlands

‘This volume provides a masterful investigation of the multiple points of interaction between freshwater and international law, and compelling and insightful analyses of such interactions bearing out and substantiating the thrust of the volume – mapping out the “multiple challenges” facing international law in its water governance role at different, relevant scales – global, regional and sub-regional. The volume’s focus on these “multiple challenges” is particularly welcome at a time when the planet’s freshwater endowment is coming under increasing pressure from a multiplicity of factors, forcing policymakers, lawmakers, government negotiators and private-sector players on the water scene to challenge well-established behavioural and regulatory patterns, domestically and in relation to transboundary inter-State relations. In its stimulating multifarious approach, the volume offers fresh and insightful perspectives of some tested facets of the water governance role of international law, dealing with rivers, lakes and groundwater aquifers shared by a multiplicity of States. Some novel facets like, notably, the human right to water, trans-national trade in land and water resources, the rights of local communities, and State succession to water treaties, are also canvassed masterfully, adding to the value of the volume not only to international water law specialists, but also to the vast and growing population of water professionals in general. In sum, the volume is a must for all those who know and practise international and domestic water law, who influence the international water governance debate at the global, regional, and sub-regional scales, and who, in general, interact with water resources in the transboundary but also in the domestic setting of their respective countries.’
– Stefano Burchi, Chairman of the International Association for Water Law – AIDA

2. The Law of International Watercourses: Achievements and Challenges
Lucius Caflisch

PART I: WATER AS A VITAL RESOURCE FOR STATES AND INDIVIDUALS
3. Water Security, Perceptions and Politics: The Context for International Watercourse Negotiations
David Grey and Dustin Garrick

4. Water and Sanitation are Human Rights: Why Does it Matter?
Catarina de Albuquerque

6. Do People Have Rights in Boundaries’ Delimitations?
Marcelo Kohen and Mara Tignino

PART II: THE PROMOTION OF WATER COOPERATION THROUGH UNIVERSAL, REGIONAL AND LOCAL REGIMES
7. The Codification of Universal Norms: A Means to Promote Cooperation and Equity?
Stephen C. McCaffrey

10. Transboundary Water Resources and International Law: The Example of the Aquifer Management of the Geneva Region (Switzerland and France)
Gabriel de los Cobos

12. The Senegal River Legal Regime and its Contribution to the Development of the Law of International Watercourses in Africa
Makane Moïse Mbengue

PART III: WATER AS A SHARED NATURAL RESOURCE
13. The Contribution of Procedural Rules to the Environmental Protection of Transboundary Rivers in Light of Recent ICJ Case Law
Owen McIntyre

19. India and Pakistan’s Truculent Cooperation: Can it Continue?
Undala Alam