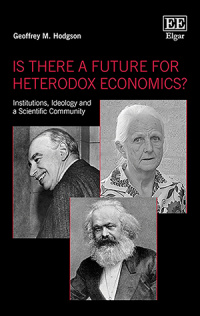 Is There a Future for Heterodox Economics?

Institutions, Ideology and a Scientific Community

9781789901603 Edward Elgar Publishing
Geoffrey M. Hodgson, Institute for International Management, Loughborough University London, UK
Publication Date: 2019 ISBN: 978 1 78990 160 3 Extent: 256 pp
Over the last 50 years, the community of heterodox economists has expanded, and its publications have proliferated. But its power in departments of economics has waned. Addressing this paradox, this book argues that heterodox economists are defined more by left ideology than by a shared understanding of the nature of orthodox economics and of what should replace it. Heterodox economists cannot agree on what heterodoxy means. This volume applies work on the social nature and institutions of science to help explain the failure of heterodox economics to gain ground. It assesses some strategic options for its future.

Employing insights from the sociology and philosophy of science, the author explores the marginalization of heterodox economics in the academic community and its exclusion from positions of power. This perceptive book also shows how the weaknesses of a particular version of heterodoxy stemming from the Cambridge economics of the 1970s have been replicated globally in much of contemporary heterodox economics. The author considers how the field can adapt in order to improve and sustain its presence in academia.

Social scientists and economists will find this book both enlightening and useful. In particular, it will be invaluable to student networks and others critical of mainstream economics, and to those teaching economics at undergraduate and postgraduate level.

Critical Acclaim
‘ . . . all heterodox economists—both young and veteran, both left and right leaning—should read this thought-provoking book. Indeed, every economist or other social scientist interested in successful and unsuccessful academic strategies and all of those puzzled about the reasons why important heterodox contributions haven’t permeated the mainstream economic profession should read this book. . . . This book certainly offers a compelling explanation of why heterodox economics has not been successful at retaining academic power and influence within the economics profession, and it explains the challenges that the heterodox community must face in order to successfully challenge the current orthodoxy.’
– Pablo Paniagua Preito, Cosmos + Taxis

‘Hodgson provides the most comprehensive examination of the foundations and direction of heterodox economics to date. This book should be required reading for all those engaged in building alternatives to mainstream economics. Strongly recommended.’
– John B. Davis, Marquette University, US and University of Amsterdam, the Netherlands

‘The heterodox economics project, born in the golden age of Cambridge Economics, has largely failed to develop a core consensus and build a strong and effective scientific community. Geoff Hodgson has written an engrossing explanation of what went wrong. Every heterodox economist should read this book.’
– Jason Potts, RMIT University, Australia

‘An excellent critical survey of a great deal of material loosely called heterodox, plus suggestions as to how that part of the subject might be developed in the future–making it, among other things, a guide for those who wish to do further work in this area. I know of nothing else like it in the literature.’
– Richard G. Lipsey, Simon Fraser University, Canada

‘Hodgson's masterful review of orthodoxies and heterodoxies focuses on the absurdity of recommending planning, or scorning it, without answering the empirical question asked in the 1930s by the “socialist calculation debate.” How well does planning or the market work? Idealism assumes the answer without actually doing the science.’
– Deirdre N. McCloskey, University of Illinois at Chicago, US

‘Every young heterodox scholar should read this book, as should veteran heterodox economists who are puzzled about why important heterodox contributions have not had the impact they deserved to have. The book provides a compelling account of the challenges that heterodox economists have faced, and continue to face, and it leaves the reader with a strong sense that things could have been, and could be, much better if more heterodox economists strove to integrate compatible aspects of the many diverse approaches that constitute heterodox economics.’
– Peter E. Earl, University of Queensland, Australia

‘Is there a future for the alternatives to mainstream economics? Dealing with this important question does not only require a deep understanding of the current economic theories and of the history of economic thought. It demands also a careful analysis of the institutional mechanisms by which scientific communities commit themselves to certain paradigms and change these commitments. In this excellent book Hodgson deals with all the dimensions of this complex issue.’
– Ugo Pagano, University of Siena, Italy

‘Drawing a well-balanced picture of heterodox economics with its many political shades and theoretical nuances is no easy task. Professor Hodgson's mastery in solving the task sets new standards. His compelling analysis of the state and the future of the field is a “must read” for everyone in the heterodox camp and an invaluable source of information for all scholars in the history, philosophy, and sociology of economics.’
– Ulrich Witt, Max Planck Institute for the Science of Human History, Germany and Griffith University, Australia


Contents
Contents: Preface INTRODUCTION 1. Space exists to stop everything happening in Cambridge 2. What is heterodox economics? 3. Rumours of the death of Max U are exaggerated 4. The separate heterodoxy of evolutionary economics 5. Heterodox economics as a scientific community 6. Some possible ways forward References Index