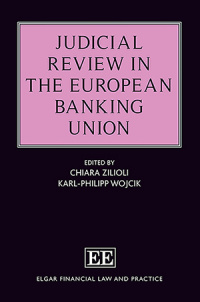 9781800373198 Edward Elgar Publishing
Elgar Financial Law and Practice series
Edited by Chiara Zilioli, General Counsel of the European Central Bank and Professor of Law, J.W. Goethe University Frankfurt, Germany and Karl-Philipp Wojcik, General Counsel of the EU Single Resolution Board and Lecturer of Law, Law Faculty, University of Bonn, Germany
Publication Date: 2021 ISBN: 978 1 80037 319 8 Extent: 672 pp
This is the first book to offer a profound, practical analysis of the framework for the judicial and pre-judicial protection of rights under the supranational banking supervision and resolution powers in the European Banking Union (EBU). It is also unique in its in-depth commentary on the developing case law from the European Court of Justice in this new field of EU litigation.

More Information
Critical Acclaim
Contributors
Contents
More Information
This is the first book to offer a profound, practical analysis of the framework for the judicial and pre-judicial protection of rights under the supranational banking supervision and resolution powers in the European Banking Union (EBU). It is also unique in its in-depth commentary on the developing case law from the European Court of Justice in this new field of EU litigation.

• clarity on the procedural requirements for judicial review
• a comprehensive commentary on the existing case law of EU courts in the field
• insight and analysis from front-line practitioners, as well as expert scholars
• a detailed and up-to-date examination of banking supervision and resolution in the EBU
• discussion of the development of EBU law as a crucial area of EU law and its integration into the EU’s legal order.

This book is a must-read for practitioners in the field of banking law and regulation. In particular it will be the authoritative reference point for those working in European and national public institutions such as supervisory and resolution authorities, courts, central banks and ministries of finance, as well as those working in or advising private organisations concerned with the exercise of supervisory and resolution powers. The book will also be of significant interest to scholars and postgraduate students of EU financial and banking law and governance.

Critical Acclaim
‘The European banking union has led to the creation of a unique legal framework in which national and European authorities and rules governing banking supervision and resolution procedures are intertwined. This brings about many challenging and interesting questions with regard to judicial protection of banks, shareholders and other stakeholders that are currently emerging into a whole new branch of litigation before the European courts. This book gathers contributions by highly recognized practitioners and researchers that have closely followed the developments from the very beginning and gives a comprehensive and problem-oriented overview of current questions as well as possible future developments. It is therefore a highly useful tool for everyone working in this field.’
– Juliane Kokott, Advocate General of the Court of Justice of the European Union, Luxembourg

‘Though focused on the specifics of practice in the EU, and the European Banking Union in particular, this book also makes important contributions to the subject of judicial review of banking supervision in other jurisdictions. The analyses of leading European legal experts will be of interest in all countries where judicial review must balance the need for supervisory discretion in overseeing complex financial firms with the imperatives of democratic accountability and administrative fairness.’
– Daniel K. Tarullo, Harvard Law School and former Governor of the Federal Reserve, US

1. European Banking Union: a giant step towards European integration and a challenge
for judicial review 1
Chiara Zilioli and Karl-Philipp Wojcik

PART I COMMON ASPECTS OF JUDICIAL REVIEW IN THE BANKING
UNION
2. Democratic accountability within the framework of the SSM and the SRM as a
complement to judicial review 17
Édouard Fernandez-Bollo
3. Administrative pre-litigation review mechanism in the SSM: The Administrative Board
of Review 28
Eleni Koupepidou
4. Administrative pre-litigation review mechanism in the Single Resolution Mechanism
(SRM): The SRM Appeal Panel 44
Marco Lamandini and David Ramos Muñoz
5. Private law in Banking Union litigation 59
Matthias Haentjens
6. Jurisdiction, locus standi and the circulation of judgments in the Banking Union 77
Matthias Lehmann
7. Composite procedures in the SSM and SRM – an analytical overview 97
Filipe Brito Bastos
8. Procedural and judicial implications of composite procedures in the Banking Union 114
Vittorio Di Bucci
9. The judicial review of discretion in the Banking Union: from ‘soft’ to ‘hard(er)’ look? 130
Michael Ioannidis
10. Procedural law requirements for conducting administrative procedures by the ECB and
the SRB 146
Klaus Lackhoff
11. Confidentiality and access to documents in the Banking Union 165
Daniel Sarmiento
12. Interim relief 194
Emilie Yoo
13. Banking Union and the Charter of Fundamental Rights 209
Niamh Moloney
14. The liability of authorities in supervisory and resolution activities 221
Martina Almhofer

PART II SPECIFIC ASPECTS OF JUDICIAL REVIEW WITHIN THE SSM
PILLAR OF THE BANKING UNION
15. The application of national law by the ECB, including options and discretions, and its
impact on the judicial review 236
Andreas Witte
16. Banking authorisations and the acquisition of qualifying holdings as unitary and
composed procedures and their judicial review 251
Giorgio Buono
17. The investigatory powers, including on-site inspections, of the ECB, and their judicial
control 285
Daniel Segoin
18. The legal review of ECB instructions under Article 9 SSM Regulation 304
Carmen Hernández Saseta
19. The legal review of SSM administrative sanctions 316
Raffaele D’Ambrosio
20. The ECB’s regulatory powers, their scope and their judicial review 333
Alberto de Gregorio Merino
21. Close cooperation and aspects of judicial review 345
Agnese Pizzolla

PART III SPECIFIC ASPECTS OF JUDICIAL REVIEW WITHIN THE
SRM PILLAR OF THE BANKING UNION
22. Resolving a bank – judicial review with regard to the exercise of resolution powers 367
Jens-Hinrich Binder
23. Judicial control of resolution planning measures 395
Seraina Grünewald
24. The procedure to exercise investigatory powers, including on-site inspections, by the
SRB and their judicial control 416
Jakub Kerlin
25. The judicial review of fines and penalty payments set by the SRB 429
Leo Flynn
26. Judicial review of the SRB’s contributions and fees decisions 443
Myrte Meijer Timmerman Thijssen
27. Judicial control of the interface between the ECB and the SRB in the SRM 461
Anna Gardella
28. State aid and bank resolution law before the Court 473
Kathrin Blanck

PART IV CASE NOTES OF THE FIRST BANKING UNION CASES IN
THE GENERAL COURT AND IN THE ECJ
29. A Prime for the SSM before the Court: the L-Bank case 494
Antonio Luca Riso
30. The Crédit Mutuel Ark.a case: central bodies and the SSM, and the interpretation of
national law by the ECJ 504
Francesco Martucci
31. The Crédit Agricole cases: banking corporate governance and application of national
law by the ECB 510
Christos V. Gortsos
32. The Trasta Komercbanka cases: withdrawals of banking licenses and locus standi 521
Giorgia Marafioti
33. Silvio Berlusconi and William of Ockham: Entia non sunt multiplicanda sine necessitate –
Case C-219/17 530
Giovanni Bassani
34. The VQ case T-203/18: administrative penalties by the ECB under judicial scrutiny 542
Laura Wissink
35. Overview on the litigation on the ‘ex ante contributions’ to the SRF: the strict standard
of review adopted by the Court to ensure effective legal protection 551
Concetta Brescia Morra and Federico Della Negra
36. Public interest for resolution action in the light of the ABLV cases 564
Audronė Steiblytė
37. The VTB case: administrative penalties and administrative measures 571
Jeanne Poscia
Index 579