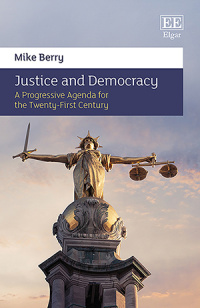 A Progressive Agenda for the Twenty-First Century

Arguing for the necessary interrelation of justice and democracy, the book presents a detailed analysis of the development of and threats to western democracy in the current phase of global capitalism. Chapters offer a progressive case for a reconstructed social democracy, rather than piecemeal reform of existing liberal democratic regimes. Berry examines how the oligarchic trajectory of capitalism must be stymied through radical institutional change and continual monitoring. The book concludes that this is a continuing political project, calling for new modes of mobilisation and the ecological emergence of new values and world views.

Introducing the critical role of uncertainty and the relevance of real time to the question of progress defined as increasing justice, this book will be critical reading for scholars and students of political philosophy, political economy and public policy. It will also be beneficial for progressive policy makers and advisers questioning existing policy platforms and settings.

Critical Acclaim
‘Justice and Democracy is a well-written and engaging book. Being true to his rejection of a clear division of intellectual labour between a political philosopher and social scientist, Berry juxtaposes nicely philosophical thinking on justice with rich historical and political economy narratives of various current issues ranging from surveillance capitalism and the rise of populism to climate change and global pandemic.’
– Sine Bağatur, Housing, Theory and Society

‘This work is accessible to newcomers and will keep old hands enthralled.’
– Anitra Nelson, Progress in Political Economy

‘A thorough reappraisal of the strained relationship between justice and democracy has never been more important than in our current global context of the Great Unsettling. Mike Berry not only offers a penetrating historical analysis of this relationship, but also provides a thoughtful roadmap to social justice based on the necessary restructuring of global capitalism. Rejecting both neoliberal market globalism and the populist retreat to economic nationalism, this book calls instead for a reglobalization of the enduring social democratic principles of equality, solidarity, and anti-authoritarianism. A must-read!’
– Manfred B. Steger, University of Hawai'i at Manoa, US and Western Sydney University, Australia
Contents
Contents: Introduction: anti-entropy – the idea of progress PART I THE IMPERATIVES OF JUSTICE 1. Why justice matters 2. The pursuit of the ideal 3. Working towards justice PART II THE FRAGILITY OF DEMOCRACY 4. Why democracy matters 5. The threats to democracy 6. Shoring up democracy Epilogue: looking forward References Index
Add to Wish List
eBook for individuals
978 1 80037 091 3
From $40.00
Click here for options
eBook for library purchase
978 1 80037 091 3
View sample chapter and check access on: