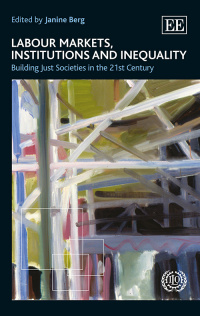 9781784712099 Edward Elgar Publishing
Edited by Janine Berg, Senior Development Economist, International Labour Office, Switzerland
Publication Date: 2015 ISBN: 978 1 78471 209 9 Extent: 432 pp
Labour market institutions, including collective bargaining, the regulation of employment contracts and social protection policies, are instrumental for improving the well-being of workers, their families and society. In many countries, these institutions have been eroded, whilst in other countries they do not exist at all.

More Information
Critical Acclaim
Contributors
Contents
More Information
Labour market institutions, including collective bargaining, the regulation of employment contracts and social protection policies, are instrumental for improving the well-being of workers, their families and society. In many countries, these institutions have been eroded, whilst in other countries they do not exist at all.

Labour Markets, Institutions and Inequality includes empirical case studies, from both developed and developing countries, which examine the role of institutions in ensuring equitable income distribution. The volume discusses the effect of macroeconomic, labour and social policies on inequality, highlighting how specific groups such as women, migrants and younger workers are affected by labour market institutions. Expert contributions demonstrate that in order to reduce inequality, countries must strengthen their labour market institutions through comprehensive policy formulation.

Critical Acclaim
‘Good governance, social stabilization and economic justice are not luxuries that weigh down and impede the process of development. They are the essence of development itself. This book provides the documentation required to carry the point.’
– From the foreword by James K. Galbraith

‘A deﬁning feature of recent decades has been the rise in income inequality within many, but certainly not all, countries, and perhaps most spectacularly in the US and UK. The reigning explanation remains the orthodox story that it’s all about supply and demand. . . A powerful and welcome antidote, the essays in this ﬁne book make the case that strong institutions are not only “the building blocks of just societies”, but can be, if well-designed, fully consistent with high employment and dynamic economies.’
– David R. Howell, New School for Public Engagement, US

‘The worrying trend of growing inequality was the major theme of Davos in January 2014. In this well-researched and argued volume, Janine Berg and her colleagues show convincingly how neglect for distributional concerns and equitable growth policies in macroeconomic policies and labour market policies led to this worrying trend, why a refocusing on distributional issues and equitable growth policies is urgently needed and what needs to be done to achieve that. A must-read for concerned politicians, industrialists, trade unions and researchers.’
– Rolph van der Hoeven, International Institute of Social Studies, Erasmus University, The Hague, the Netherlands

‘To sum up, this book provides wide-ranging coverage of macroeconomic, labour market and social protection policies that, taken together, can contribute to the formulation of balanced and equitable social and economic development. A particularly inspiring contribution for policy-makers and for the social partners is the emphasis on analysing the outcomes, limits and potential for improvement of policies in terms of addressing inequality and poverty which benefit society and economy as a whole.’
– Transfer

10. Income Support for the Unemployed and the Poor
Janine Berg

13. Inequalities and the Impact of Labour Market Institutions on Migrant Workers
Christiane Kuptsch