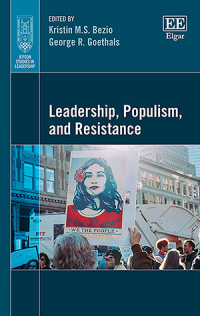 9781788979252 Edward Elgar Publishing
Jepson Studies in Leadership series
Edited by Kristin M.S. Bezio, Associate Professor of Leadership Studies and George R. Goethals, E. Claiborne Robins Distinguished Professorship in Leadership Studies, University of Richmond, US
Publication Date: 2020 ISBN: 978 1 78897 925 2 Extent: 256 pp
Leadership, Populism, and Resistance draws upon the study of history, politics, policy, media, virtue, and heroism to examine the ways in which populism and popular movements have evolved, what we have learned (and failed to learn) from them, how we depict and discuss them through popular media and the press, and, finally, how we can understand virtue and heroism as a consequence—or reaction—to populism and popularity.

More Information
Critical Acclaim
Contributors
Contents
More Information
Recent populist movements online and around the globe have drawn the attention of news media, social and political analysts, and scholars, all of whom seek to understand the patterns of influence which have produced and are produced by this populist surge. Whether nationalist or revolutionary, ideological or geopolitical, these movements have changed the way we relate to one another as leaders and followers. In its various forms, populism is changing the face and geography of global politics and society.

Leadership, Populism, and Resistance draws upon the study of history, politics, policy, media, virtue, and heroism to examine the ways in which populism and popular movements have evolved, what we have learned (and failed to learn) from them, how we depict and discuss them through popular media and the press, and, finally, how we can understand virtue and heroism as a consequence–or reaction–to populism and popularity.

This volume uses a multidisciplinary approach to examine the causes and impacts of populism and popular movements across time and around the world which would appeal to a wide variety of scholars and practitioners. Its chapters provide potential teaching tools within individual disciplines (history, psychology, media studies, political science, literature, education, leadership studies) which are useful for educators at all levels concerned with social movements, populism and democracy. The interdisciplinary nature of the volume is also accessible to non-academic audiences interested in modern populist and popular socio-political trends.
Critical Acclaim
'In a time when the Western world scratches its head about the rise of populism and the decline of democracy, journalists and pundits try to make sense out of the events of the day. This unique and engaging scholarly collection takes a different tack. By looking at the past, it escapes the tyranny of the present and offers perspective on where we are now and how we might move beyond populist leaders and restore democracy.’
– Joanne B. Ciulla, Rutgers Business School, Newark and New Brunswick, US
Contributors
Contributors: S.T. Allison, A.M.N. Archer, K.M.S. Bezio, K.M. Cassada, C. Clark, G.R. Goethals, H. Gray-Hoehn, N. Harter, J.M. Hayter, K.P. Ruscio, P Sanders, E. Semán, T.J. Shields, S.P. Spyrou, Thad Williamson, K. Yost
Contents
Contents:

HISTORICAL POPULISM
2. Muslims are the new Jesuits: what we can learn about leadership and modern Islamophobia from Shakespeare’s England 30
Kristin M.S. Bezio

POPULISM AND MEDIA
6 Talking the talk: communication as the essential element of leadership 107
Hayley Gray-Hoehn

7. Attacking the fourth estate: the nature and effects of political leaders’ war with the press 129
Allison M.N. Archer

8. #TheResistance: leadership and the exercise of dissent in the Twitterverse 148
Kimberly Yost

10. Immigration and school leadership in the Trump era: a discussion of compliance, ethic of care, and dissent 176
Thomas J. Shields and Kate M. Cassada

11. Beyond red and blue: what students need to learn if American democracy is to survive and thrive 196
Thad Williamson