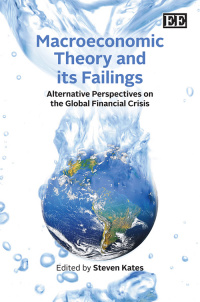 Macroeconomic Theory and its Failings

9781849803045 Edward Elgar Publishing
Edited by Steven Kates, Senior Fellow, Centre for Labour Market Research, University of Canberra, Australia
Publication Date: 2011 ISBN: 978 1 84980 304 5 Extent: 304 pp
This innovative book focuses on the current global financial crisis and the inadequacies of the economic theories being used to guide policy. In so doing, it tackles the economic theories that have been used firstly to understand its causes and thereafter to contain the damage it has brought.

The contributors bring together different perspectives from across the entire spectrum of economic opinion to examine what is likely to be the single most important economic problem of our time. The unifying feature is that all of the authors disagree with the standard mainstream neo-classical models being applied in attempting to comprehend what has gone on and then, more importantly, to devise policies to bring this recession to an end. The problems that modern macroeconomics may have caused in being the basis for economic policy are addressed, and it is concluded that the deepening problems found in economies across the developed world are not due to governments having refused to take the advice of their economic advisors but are in many respects due to their actually having taken this advice.

Suggesting alternative ways of understanding how economies work so that other types of policies might be used instead, this book will prove a fascinating read not just for scholars and policy-makers concerned with our macroeconomic and financial problems but for anyone interested in deepening their understanding of our contemporary economic debate.
Critical Acclaim
‘This admirable and comprehensive collection should prove of interest to
anyone seeking a deeper understanding of the financial crisis.’
– Tyler Cowen, George Mason University, US

2. Did Bernanke’s ‘Creditism’ Aggravate the Financial Crisis of 2008?
Tim Congdon

4. Looking at the Crisis through Marx – Or Is It the Other Way About?
Ben Fine

6. The Microeconomic Foundations of Macroeconomic Disorder: An Austrian Perspective on the Great Recession of 2008
Steven Horwitz

7. The Crisis in Economic Theory: The Dead End of Keynesian Economics
Steven Kates

8. The Coming Depression and the End of Economic Delusion
Steve Keen