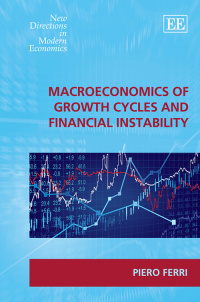 More Information
Critical Acclaim
Contents
More Information
In light of the recent economic crisis and in keeping with Hyman Minsky’s analysis of financial instability, this book considers the important interaction between cycles and growth, via the interplay between demand, supply and real-world financial issues.

Piero Ferri presents a macroeconomic study of a monetary production economy within a dynamic paradigm, where instability phenomena and inhibitive policy measures interact, and where the forces that self-regulate markets cannot prevent the occurrence of instability problems. Underpinning this paradigm is the idea that such volatility is the result of endogenous forces; shocks can trigger instability but cannot explain its persistence. As endogenous instability has multiple causes and mechanisms of transmission, the author adopts various perspectives – both analytical and by means of simulation – in order to explore and characterize the phenomenon of growth cycles and instability.

This challenging book will prove a thought-provoking read for students and scholars of macroeconomics, heterodox economics, labour markets and money, finance and banking.
Critical Acclaim
'This book by Piero Ferri presents a heterodox approach to macroeconomics based primarily on the ideas of Hyman Minsky incorporated in the Keynesian paradigm. The analysis and discussion of macroeconomic models in the book revolve around three major issues: medium-run perspective; interdependence between real and monetary economy; uncertainty and heterogeneity of economic agents. The book summarises a body of work in this area carried out by the author and his collaborators since the late 1990s.'
– Nigar Hashimzade, Mathmatical Review

‘The book offers a rich, and relatively novel, body of theoretical mechanisms through which financial instability can be understood. The models presented are given careful and thorough exposition, and could readily provide a framework for numerous theoretical extensions, particularly appending more detailed modeling of the financial system. As a compendium of Ferri’s important contributions, the book would be a valuable addition to research libraries, and should be read by all those working within the Minskian tradition.’
– William McColloch, Review of Keynesian Economics

Contents
Contents: Preface Introduction Part I: The Background 1. Dynamics in the Medium Run 2. Financial Instability 3. Macroeconomics, Uncertainty and the Fallacies of Composition 4. Heterogeneity and the Status of Macroeconomics Part II: The Markets 5. The Nature of the Labor Market 6. The Role of Imperfect Competition 7. Policies versus Self-Adjustment Part III: Endogenous Dynamics 8. A Dynamic Macro Model 9. Uncertainty, Expectations and Learning 10. Inflation, Deflation and the Phillips Curve Part IV: Growth Cycles, Income Share and the Financial Instability Hypothesis 11. A Growth Cycle Model 12. The Role of Labor Share 13. Towards a Stochastic Switching Part V: Concluding Remarks 14. Lessons 15. The Task Ahead References Index
Add to Wish List
eBook for individuals
978 1 84980 917 7
From $40.00
Click here for options
eBook for library purchase
978 1 84980 917 7
View sample chapter and check access on: