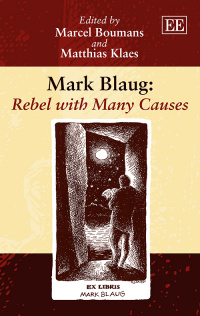 Mark Blaug: Rebel with Many Causes

9781781955666 Edward Elgar Publishing
Edited by Marcel Boumans, Associate Professor History and Methodology of Economics, Utrecht University School of Economics (U.S.E.), the Netherlands and Matthias Klaes, The University of Buckingham, UK
Publication Date: 2014 ISBN: 978 1 78195 566 6 Extent: 320 pp
This collection of eminent contributions discusses the ideas and works of Mark Blaug, who has made important and often pioneering contributions to economic history, economic methodology, the economics of education, development economics, cultural economics, economic theory and the history of economic thought. Besides these assessments of Blaug’s influence and impact in these fields, this volume also contains a selection of personal portraits which depict him as a colleague, a friend and an opponent. Blaug was also a voracious reader and prolific writer, which is clearly evidenced by the comprehensive bibliography.

More Information
Critical Acclaim
Contributors
Contents
More Information
This book celebrates the immense contributions of Mark Blaug to every aspect of economics, a discipline in which his influence and relevance still resonate today, particularly in the field of the economics of education.

This collection of eminent contributions discusses the ideas and works of Mark Blaug, who has made important and often pioneering contributions to economic history, economic methodology, the economics of education, development economics, cultural economics, economic theory and the history of economic thought. Besides these assessments of Blaug’s influence and impact in these fields, this volume also contains a selection of personal portraits which depict him as a colleague, a friend and an opponent. Blaug was also a voracious reader and prolific writer, which is clearly evidenced by the comprehensive bibliography.

A thought-provoking and stimulating collection of essays and dedications to Mark Blaug, this book will appeal to anyone interested in the history, culture and philosophy of economics.
Critical Acclaim
‘Blaug was a fierce combatant and relished intellectual disputes. Since he would have found no rhetorical praise in the various contributions of this book, but a frank discussion of his hits and misses, we venture to say that he would have enjoyed the content of this book and not simply its title. We liked it and surely many readers will too.’
– Neri Salvadori and Rodolfo Signorino, Journal of the History of Economic Thought

‘This is a wonderful book to read that analyzes an idiosyncratic and polymath economist that hardly left his audiences or his readers indifferent. Those who knew Mark Blaug will recognize the man, the intellectual, the economist, and the historian of ideas in the chapters included in the volume. Those that never had the privilege to meet him will have the opportunity to understand why he became such a significant figure in economics over much of the second half of the twentieth century.’
– Pedro Teixeira, University of Porto, Portugal

‘Mark Blaug was a nonpareil – a fine economist, an extraordinary scholar, an indefatigable editor, a generous colleague, a fierce debater. His passing was a sad loss for economics and for the history of economics. This volume, a kind of Mark Blaug in Retrospect, is a fitting memorial that, at once, captures his many parts and the wide range and depth of his thought.’
– Kevin D. Hoover, Duke University, US and Editor of the History of Political Economy

‘Mark Blaug was a short man with a great soul: he was a thinking person’s economist with an uncanny ability to capture the big picture(s) in a few precise words. His zest for living expressed itself, in part, in his love of argument and the lifelong intellectual (and sometimes personal) mentoring of his interlocutors. The chapters in this volume, written by many of his former students and intellectual peers, lovingly and critically recall the man’s life and his ideas. Jointly they introduce his wide-ranging views and interests to new generations of readers. They have the capacity to startle those of us who think we know.’
– Eric Schliesser, Ghent University, Belgium

‘Mark Blaug had an exceptional knowledge of the history of economics and a critical interest in the assumptions and judgements (often implicit) that underlie the work of economists past and present. The contributors to this volume illustrate the influence of Mark and his ideas, demonstrating their continuing relevance to all who recognise the powerful influence on the substantive content of economics of the methods by which it is developed and appraised.’
– Brian Loasby, Stirling University, UK

‘This is a wonderful collection honouring the memory of Mark Blaug, an intellectual “giant” among economists. It includes a series of personal appreciations, which give an engaging sense of the man and pay tribute to the diversity and extent of his contributions. Many chapters focus on two of the areas in which he exercised strong leadership – methodology and history of thought – taking forward debate on issues with which he had engaged. Mark Blaug’s important influence on cultural economics is also addressed.’
– Sheila Dow, Stirling University, UK

‘Mark Blaug is responsible more than anyone else for the rise of the history and philosophy of economics as independent, mature fields of research. During his lifetime, he influenced directly three generations of scholars and many more will continue to benefit from his legacy in the future. Some of the best historians and methodologists of economics pay homage to Blaug with essays that have been especially prepared for this occasion. Blaug would have been delighted and so will the readers of this volume.’
– Francesco Guala, University of Milan, Italy
Contributors
Contributors: R.E. Backhouse, M. Boumans, B. Caldwell, J.B. Davis, E. Dekker, V. Ginsburgh, C. Handke, D.W. Hands, G.M. Hodgson, M. Klaes, D. Laidler, R.G. Lipsey, H. Maas, J. Maloney, T. Mayer, A. Peacock, A. Salanti, R. Towse, J. Vromen
Contents
Contents:

7. Mark Blaug on the Quantity Theory: A Skirmish on the Border between Science and Ideology in the History of Economic Thought
David Laidler

12. Mark Blaug on the Historiography of Economics
John B. Davis

14. Between the Scylla of Whig History and the Charybdis of Methodological Vacuum
Andrea Salanti

15. Mark Blaug and the Economics of the Arts
Victor Ginsburgh

17. GP08 is the New F53: Gul and Pesendorfer’s Methodological Essay from the Viewpoint of Blaug’s Popperian Methodology
D. Wade Hands