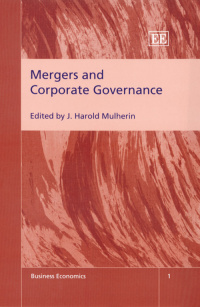 More Information
Critical Acclaim
Contributors
Contents
More Information
This authoritative collection of previously published articles emphasizes recent empirical research on mergers and corporate governance. The papers included present provocative questions dealing with the causes and effects of takeover and restructuring activity, the distribution of wealth gains between bidding and target firms, and the relevance of governance in modern corporations.

The discussion of such questions presents the latest thinking on mergers and corporate governance and also offers guidance for future work in the area. The body of work included in the volume is of particular relevance to scholars in corporate finance and industrial organization as well as policymakers in antitrust, corporate law, and securities regulation.
Critical Acclaim
‘. . . this volume is certainly worthy of study. It is a valuable reference for anybody with an interest in mergers, and the entire treatise is both instructive and stimulating in its discussions. Mulherin has done an excellent piece of work in providing an overview of some of the central themes in the mergers and corporate governance literature.’
– Thomas Poulsen, Finance Research Group, Aarhus School of Business in SUERF Newsletter, Dec 2004 (www.suerf.org)

Developments in Entrepreneurial Finance and Technology