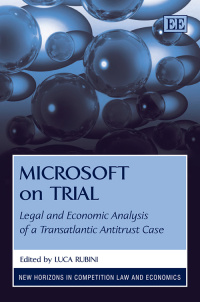 Legal and Economic Analysis of a Transatlantic Antitrust Case

9781848442443 Edward Elgar Publishing
New Horizons in Competition Law and Economics series
Edited by Luca Rubini, Senior Lecturer in European Law and Deputy Director, Institute of European Law, University of Birmingham, UK
Publication Date: 2010 ISBN: 978 1 84844 244 3 Extent: 560 pp
This fascinating and highly relevant book facilitates discussion on the difficult technical, legal and economic issues with respect to innovation, competition and welfare raised, through the span of more than a decade, by the US and EC Microsoft antitrust cases. It assesses their impact on the evolution of European and US laws on competition and intellectual property in the IT sector and beyond.

More Information
Critical Acclaim
Contributors
Contents
More Information
Microsoft on Trial analyses the antitrust cases that have involved Microsoft on both sides of the Atlantic and offers a thorough and timely discussion on the regulation of unilateral behaviour in a topical sector.

This fascinating and highly relevant book facilitates discussion on the difficult technical, legal and economic issues with respect to innovation, competition and welfare raised, through the span of more than a decade, by the US and EC Microsoft antitrust cases. It assesses their impact on the evolution of European and US laws on competition and intellectual property in the IT sector and beyond.

The book, which adopts a multidisciplinary approach (IT, law, economics), benefits from the valuable insights of 20 contributors including those that were directly involved in the EC case. Practitioners, advanced postgraduates and academics will find this unique book an essential resource.
Critical Acclaim
‘I would highly recommend this book to any practitioner, academic, or postgraduate student interested in either the specifics of the EU and US Microsoft cases or more generally in the current scope of unilateral conduct laws on both sides of the Atlantic. It is refreshingly easy to navigate, thanks to an excellent index and table of cases and legislation, no mean feat in light of the fact that the book is a collection of 14 independent essays. The editor, Luca Rubini, deserves particular praise for this achievement. The editor also provides an invaluable multi-disciplinary approach to the various issues raised by the increasing interaction of competition law and intellectual property law in the information technology sector and beyond.’
– Anthony Dawes, European Law Review

‘. . . the book is a valuable resource for anybody wishing to gain in-depth knowledge of the competition proceedings related to Microsoft.’
– Tjarda van der Vijver, Common Market Law Review

‘Much has already been written about the case, but these fourteen chapters contain some of the best descriptions of the facts and markets accompanied by economic analysis. All the contributors write lucidly. . . The chapters have been written tightly, and many points not obvious on a quick reading of the case have been analysed perceptively. Detailed descriptions of the conduct and the market in which it occurred were made throughout.’
– Valentine Korah, World Competition

‘What makes this collection outstanding is that it is unlikely that any single person could have produced anything as good, because the Microsoft cases are just too extensive in their jurisdictional and subject matter scope to be encompassed by a single person. . . none of the essays here appear to me to be poor – all are good, some are excellent. . . I have read the book cover to cover and strongly recommend it to anyone interested in the Microsoft case in particular, but, more importantly, to anyone with an interest in the state of competition law at the start of the 21st century, and its role moving forward. There are even good tables of cases and legislation, and a good index – an increasing rarity these days. . . special credit must be given to the editor, Luca Rubini.’
– Mark Furse, European Competition Law Review
Contributors
Contributors: S. Anderman, A. Andreangeli, M. Baldauf, N. Banasevic, J.-F. Bellis, N. Economides, J. Fejø, I.S. Forrester, E.M. Fox, M.J. Gil-Moltó, P. Hellström, C. Jackson, T. Kasten, I. Lianos, R.J.R. Peritz, C. Petrucci, D. Ridyard, L. Rubini, B. Vesterdorf, A. Walsh
Contents
Contents:

PART II: FROM BRUSSELS TO LUXEMBOURG: A EUROPEAN STORY
2. Windows into the World of Abuse of Dominance: An Analysis of the Commission’s 2004 Microsoft Decision and the CFI’s 2007 Judgment
Nicholas Banasevic and Per Hellström

5. The Microsoft Case: You Reap what you Sow?
Jens Fejø

10. Tying, Technological Integration and Article 82 EC Treaty: Where do we go after the Microsoft Case?
Arianna Andreangeli

13. The Quest for Appropriate Remedies in the EC Microsoft Cases: A Comparative Appraisal
Nicholas Economides and Ioannis Lianos

14. Beyond Microsoft: An International Agreement on Abuse of Market Power?
Carlo Petrucci