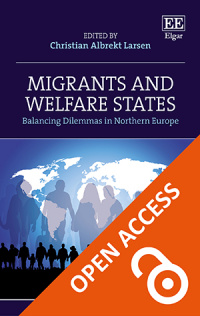 9781803923727 Edward Elgar Publishing
Edited by Christian Albrekt Larsen, Professor of Comparative Welfare State Studies, Department of Politics and Society, University of Aalborg, Denmark
Publication Date: October 2022 ISBN: 978 1 80392 372 7 Extent: c 232 pp
This is an open access title available under the terms of a CC BY-NC-ND 4.0 License. It is free to read, download and share on Elgaronline.com.

This timely book explores how Northern European countries have sought to balance their welfare states with increased levels of migration from low-income countries outside the EU. Using case studies of the Netherlands, Germany, Denmark, and Sweden, leading scholars analyse the varying approaches to this so-called ‘progressive dilemma’.

Providing an in-depth analysis of the relationship between public policies and the flow of migrants into these Northern European states, the book considers which destination-country policies most attract asylum seekers and other migrants. Chapters explore how the four states have responded to increased levels of immigration, examining their handling of issues related to integrating admitted applicants into the labour market, educating the children of immigrants, and naturalisation. Concluding with an investigation into contemporary public consensus regarding migrant selection, based on original survey experiments, the book sheds light on an issue that has become both politically and academically salient in Europe since the late 20th century.

Interdisciplinary in scope, this expansive book contributes to the emerging field of research in the intersection between European migration studies and welfare studies. Its examination of the states’ varying responses to increased migration will be of significant interest to researchers, policymakers, and public intellectuals in Northern Europe and beyond.
Critical Acclaim
‘This stimulating book redefines the “progressive dilemma”, the fear that immigration and ethno-racial diversity undermine the welfare state. Drawing on a comprehensive analysis of the Netherlands, Germany, Denmark, and Sweden, the book concludes that the tensions between natives and newcomers are real, but the result is not weaker social programs but pressure for more selective immigration. The battles and choices occur at the border.’
– Keith Banting, Queen's University, Canada
Contributors
Contributors include: Karen Nielsen Breidahl, Mette Buchardt, Lanciné E.N. Diop, Anna Diop-Christensen, Nanna Ramsing Enemark, Troels Fage Hedegaard, Kristian Kriegbaum Jensen, Christian Albrekt Larsen, Jin Hui Li, Tore Vincents Olsen, Emma Ek Österberg, Rasmus Lind Ravn, Trine Lund Thomsen