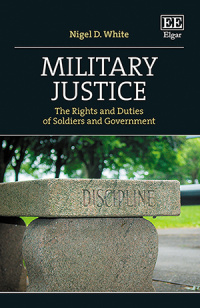 The Rights and Duties of Soldiers and Government

More Information
Critical Acclaim
Contents
More Information
While military law is often narrowly understood and studied as the specific and specialist laws, processes and institutions governing service personnel, this accessible book takes a broader approach, examining military justice from a wider consideration of the rights and duties of government and soldiers engaged in military operations.

By exploring the relationship between the military and society, Nigel White develops a nuanced rationale for military justice. Making the case for both the continuation of military justice and key Fusterreforms, he analyses the military’s place in society and recognises the wider influences of justice and law upon it. Throughout the book, military justice is framed broadly to cover all relevant laws including service law, constitutional law, the law of armed conflict, international human rights law and international criminal law. This discussion is supported with analysis of a range of jurisprudence from domestic and international courts. The book considers the legal problems that arise in different military contexts, as well as positioning military justice as a balance between the rights and duties of government and those of soldiers.

Tackling an important and timely topic, Military Justice will be key reading for academics, researchers and students within the fields of human rights, public international law, conflict and security law, and especially those with an interest in service law, military history and war studies. It will also be a useful reference point for practitioners working within relevant prosecuting authorities and within law firms offering legal advice to soldiers.
Critical Acclaim
‘This detailed and comprehensive analysis of military justice is a brilliant addition to the lexicon of academic commentary on military justice. It provides a forensic examination of the relationship between soldier and state, and does not duck the difficult issues of dealing with “villains” who are perceived as “heroes” by politicians and the general public. It provides historical context while adding to the ongoing debate about the relevance of a separate system of justice in the modern era.’
– Jeff Blackett, Judge Advocate General of HM Armed Forces 2004–2020

‘This excellent book provides a concise and deeply nuanced assessment of an operationally vital, politically charged, and intensely contextual field of legal inquiry. Encompassing national and international law, and recognising the practical impact of military capability upon our interpretation and application of this law, Nigel White once again shows us why he is the leading scholar in this field, and a worthy successor to Peter Rowe and Hilaire McCoubrey as its flagbearer.’
– Robert McLaughlin, Australian National University, Australia

‘The domestic and international legal frameworks that govern the deployment of the United Kingdom’s armed forces and the rights of its members are complex and contested. Adopting an expansive approach to the meaning of military justice, in this book Professor White takes the reader on a journey from the drafting of the Magna Carta to military operations in Afghanistan and Iraq. In the process, he unravels the relationship between the soldier and the state, and provides an engaging and thoughtful analysis of the law that regulates the actions of the armed forces at home and abroad.’
– Alison Duxbury, University of Melbourne, Australia
Contents
Contents: Preface Introduction to Military Justice 1. Framing military justice 2. Constitutional laws and the armed forces 3. Emergency powers and internal deployments 4. Prerogative powers and external deployments 5. The use of lethal force 6. Detention and abuse 7. The court martial 8. Rights and protections of soldiers 9. The scales of military justice Index
Add to Wish List
eBook for individuals
978 1 78990 280 8
From $46.40
Click here for options
eBook for library purchase
978 1 78990 280 8
View sample chapter and check access on: