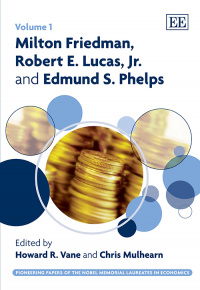 ‘The nature, content and boundaries of economics are changing. There is no better way of examining the key contributions that have shaped the discipline in the last half century than by looking at the pioneering works of the Nobel Laureates in Economics. These volumes not only provide a treasure house of material of high intrinsic worth, but also help us to understand what kind of approaches and ideas have been successful in persuading other economists, and thereby provide valuable material for understanding the evolution of the discipline. The idea behind this series of volumes is brilliant.’
– Geoffrey M. Hodgson, University of Hertfordshire Business School, UK
Contributors
18 articles, dating from 1953 to 1988

Introduction to Part I
Howard R. Vane and Chris Mulhearn