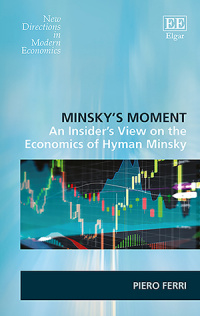 An Insider’s View on the Economics of Hyman Minsky

9781788973724 Edward Elgar Publishing
New Directions in Modern Economics series
Piero Ferri, Professor Emeritus of Economics, University of Bergamo, Italy
Publication Date: 2019 ISBN: 978 1 78897 372 4 Extent: 264 pp
At its core this book sets out the analytical and methodological foundations of Minsky’s financial instability hypothesis (FIH). Grounded on the joint work of Piero Ferri and Hyman Minsky, it offers insightful analysis from a unique insider's perspective. The objective is to deepen and enlarge the toolbox used by Minsky and to place the analysis within a dynamic perspective where a meta model, based upon regime switching, can encompass the different forms that the FIH can assume.

More Information
Critical Acclaim
Contents
More Information
Based upon his life-long collaboration with Hyman Minsky, Piero Ferri explores and reconsiders Minsky’s moments in the aftermath of the ‘Great Recession’ of 2008. He sets out the analytical and methodological foundations of Minsky’s financial instability hypothesis, offering insightful comments from a unique insider’s perspective.

This book stresses the necessity of including what has been recently discovered about Minsky’s financial instability hypothesis into his lifelong research program, in order to obtain a more complete picture of both his vision and his analytical apparatus. It seeks to move beyond a discussion of Minsky’s original ideas, to verify how they are capable of meeting the challenges derived from the modern evolution of the economy. Developing a meta-model based on regime switching, Piero Ferri examines how the different financial instability hypotheses can be accounted for.

Researchers and advanced students in macroeconomics and finance will greatly benefit from the exploration of how Minsky predicted the ‘Great Recession’, and why his work is of fundamental relevance today. Economic policy makers will also find this book to be a useful tool in discovering methodological innovations to aid further financial recovery from the 2008 economic crisis.

Critical Acclaim
‘Piero Ferri’s book is a welcome addition to our knowledge of the work of Hyman Minsky. The book is unique because it contains papers co-authored with Minsky and extends his analysis in light of institutional and methodological changes. . . Ferri’s book will be of great interest to both mainstream and heterodox economists.’
– Ronnie J. Phillips, Journal of Economic Issues

‘This book presents interesting and original insights into Hyman Minsky’s thinking based on a long and close personal relationship. It offers a variety of new developments and draws on the author’s extensive knowledge of economic thinking over the past 50 years to put Minsky’s work into context.’
– Steven Fazzari, Washington University in St. Louis, US

‘Piero Ferri’s new book offers an alternative approach to Hyman Minsky’s well-known financial instability hypothesis (FIH) that is well-grounded in work on which they collaborated for over a decade. Rather than focusing on the “Minsky Moment” as so many others have done, Ferri places the FIH within Minsky’s life-long research program that began with his dissertation and continued in his years at the Levy Economics Institute before his death in 1996. The FIH is presented as a particular case of Minsky’s general vision of the evolution of a complex, dynamic system. While instability is natural, it is constrained by policy and institutional ceilings and floors. Building on co-authored papers with Minsky, Ferri extends the analysis, in particular by returning to and updating Minsky’s early focus on the dynamics of labor markets in models that allow for more complex analysis.’
– L. Randall Wray, Levy Economics Institute, Bard College, US

‘This book is a fascinating journey in search of the inner roots of the financial instability hypothesis theorized by Minsky. His towering figure assumes a convincing new light, where heterogeneity, emergency and complexity converge in the idea that credit, and not money, and private information are the links that connect present and future. The reader will recognise Minsky as a unique figure among the economists of the last century.’
– Mauro Gallegati, Polytechnic University of Marche, Italy
Contents
Contents: Preface 1: Overview Part I “It” Happened Again 2. The Minsky Moment And The Economics Of Minsky 3. A Synoptic View Of The Financial Instability Hypothesis 4. An Insider’s View Part II Co-Authoring 5. Prices, Employment And Prices 6. The Breakdown Of The IS-LM Synthesis: Implications For Post-Keynesian Economic Theory 7. Market Processes And The Thwarting System Part III Deepening The Methodology 8. Micro And Macro In Minsky’s Models 9. The Foundations Of Medium-Run Dynamics 10. New Tools For Dynamics Part IV Entering The Black Box 11. Drivers, Adapters And Constraints 12. Growth, Technical Change And Unemployment 13. Heterogeneity In The Labor Market Part V The Economics Of Minsky In A Dynamic Setting 14. The Financial Instability Hypothesis And The Great Recession 15. A Meta-Model Of The Financial Instability Hypothesis 16. Final Considerations And Challenges Index