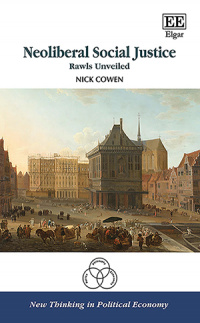 Cowen shows how general rules of property and voluntary exchange facilitate widespread cooperation. Revisiting the works of John Rawls, he offers an interdisciplinary reconciliation of Rawlsian principles with liberal democracy by introducing 'robust property-owning democracy', a new form of governance that aims to achieve social justice via practical, liberal means. Chapters address the knowledge problem and the incentive problem that emerge when aiming for a fair distribution of social resources and demonstrate how everyday political bargaining can help achieve just outcomes for all.

Utilising insights from philosophy, politics and economics to show the role of market institutions and constitutional government in producing social justice, this book is crucial reading for academics, researchers and students of PPE and the political sciences. Its practical policy proposals will further benefit policymakers interested in mechanisms that spread the benefits of economic growth equitably.

Critical Acclaim
‘Nick Cowen’s Neoliberal Social Justice can be regarded as an intellectual accomplishment. It not only contributes significantly to the growing research sub-field of PPE, but provides unique insights with regard to collective decision-making and the formulation of rules for an economic–socio–political order that works for all people. This book is required reading for all those interested in the pursuit of a freer and fairer world.’
– Mikayla Novak, Public Choice

‘To sum up, Neoliberal Social Justice is an important book, and I hope it receives the attention that it is due. Cowen makes two contributions that should change the discourse surrounding the ever-present Rawls and his theory of justice. First, for those who choose to work within ideal theory, Cowen shows that Rawls’s theory of justice is not as hostile to markets as initially seems to be the case. There are compelling arguments for a greater reliance on markets even if one accepts the ideal theorist’s sanguine behavioral assumptions. And second, for those who walk the relatively uncharted terrain of non-ideal theory, there is still much in Rawls to hold on to. Rawls’s theory can be made to work within the confines of more realistic behavioral assumptions, but the institutional implications of doing so are far different from what Rawls and his followers anticipated.’
– Brian Kogelmann, The Review of Austrian Economics

‘The problem any political group faces is how to generate morally binding political choice that somehow reconciles the conflicting plans and purposes of many citizens. The “first-wave” Rawlsians argued that consensus necessarily emerges from the reasoned consideration of shared goals. The “second-wave”, including Tom Christiano, Gerald Gaus, and others, used Rawlsian methods but amended Rawls’s conclusions, suggesting concrete procedures by which a binding consensus could be generated. In this book, Cowen proposes a novel third approach: expand Rawls’s approach to incorporate the limitations of real political arrangements to solve the problem of discovery and incentives. Cowen’s conclusion, that even – and perhaps especially – doctrinaire Rawlsians should support liberal institutions such as market systems and capitalist profit and loss, is sure to generate controversy. But the book is well-argued, and the argument is firmly situated in substantive arguments in political philosophy. Cowen’s work is a landmark in our understanding of the relationship between ethical theories and practical politics.’
– Michael C. Munger, Duke University, US

‘From Rousseau and Smith to John Rawls and Milton Friedman, liberalism has wished humans to be equal. In his closely argued yet lucid book, Nick Cowen melds the left and right of liberalism. Such an equality requires a plausible theory of what’s economically and politically possible. This Cowen elegantly supplies.’
– Deirdre Nansen McCloskey, author of Why Liberalism Works
Contents
Contents: 1. Introduction PART I WHY INSTITUTIONS MATTER IN IDEAL THEORY 2. Ideal theory and the basic structure 3. Knowledge, not incentives PART II DISTRIBUTIVE JUSTICE AND THE KNOWLEDGE PROBLEM 4. Rawls’ neoclassical economics 5. The burdens of knowledge 6. Why capitalism 7. Why not market socialism 8. Why not economic democracy PART III DISTRIBUTIVE JUSTICE AND THE INCENTIVE PROBLEM 9. Fairness failure 10. The constitutional point of view 11. The robust case for behavioural symmetry PART IV DISTRIBUTIVE JUSTICE AND ECONOMIC LIBERTY 12. Basic economic liberties and the moral powers 13. The subjective and objective conditions of the circumstances of justice 14. Developing moral capacities PART V ROBUST PROPERTY-OWNING DEMOCRACY 15. Defining property-owning democracy 16. The robustness critique of property-owning democracy 17. The case for a robust property-owning democracy 18. Conclusion Index
Add to Wish List