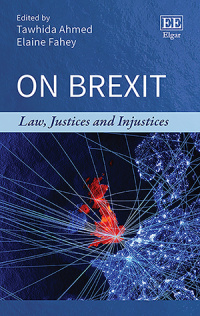 9781789903003 Edward Elgar Publishing
Edited by Tawhida Ahmed, Reader in Law and Elaine Fahey, Professor of Law, City Law School, City, University of London, UK
Publication Date: 2019 ISBN: 978 1 78990 300 3 Extent: 320 pp
Timely and engaging, this topical book examines how Brexit is intertwined with the concepts of justice and injustice. Legal scholars across a range of subjects and disciplines utilise a multitude of case studies from consumer law, asylum law, legal theory, public law and private law, in order to explore the impact of Brexit on our ideas of justice. The book as a whole aims to engage with the methodology, lexicon and explicitness of analytical perspectives in relation to Brexit.

More Information
Critical Acclaim
Contributors
Contents
More Information
Timely and engaging, this topical book examines how Brexit is intertwined with the concepts of justice and injustice. Legal scholars across a range of subjects and disciplines utilise a multitude of case studies from consumer law, asylum law, legal theory, public law and private law, in order to explore the impact of Brexit on our ideas of justice. The book as a whole aims to engage with the methodology, lexicon and explicitness of analytical perspectives in relation to Brexit.

The EU is the epitome of a globalised world: an organisation with a huge number of members, partners and collaborators, seeking to further common goals, with pooling of resources to address shared concerns. Much attention has been paid to justices or injustices in relation to the impact that they have on beginning or increasing global relations, and in turn on individuals or groups. This thought-provoking book analyses the reverse: what justice is brought about by withdrawal therefrom?

On Brexit will be of great interest to students and academics working on EU law and politics and global relations due to its interdisciplinary nature. It will also be a key resource for both UK and EU governments and policy actors seeking to broaden their perspective on Brexit.

Critical Acclaim
‘This volume will be of interest to everyone working on (or simply interested in) Brexit and especially to those looking at the issue of Brexit and justice from a philosophical perspective. Its theme and methodological approach set it apart from earlier Brexit work. It brings together some of the most interesting voices in legal scholarship.’
– Menelaos Markakis, EU Law Live

‘Beyond the tortured processes of the UK’s extraction from the EU lies a multitude of questions about what Brexit means for justice and injustice. Ahmed and Fahey have gathered an impressive array of scholars to uncover these questions, and some potential answers. This is essential reading for anyone trying to make sense of what the form and substance of Brexit means for law and justice.’
– Paul James Cardwell, University of Strathclyde, UK

‘Much has been said and done about Brexit, but in reality many fundamental questions remain to be addressed. This collection is a very much welcome addition to the debate on Brexit, especially to help us understand what is the role of law in this process and how we can think more critically about this role in the context of broader notions of justice and legal method.’
– Nuno Ferreira, University of Sussex, UK
Contributors
Contributors: T. Ahmed, S. Bardutzky, D. Collins, J. Corkin, S. Douglas-Scott, E. Fahey, S. Germain, J. Grogan, D. Kostakopoulou, D. Kukovec, L. McDonagh, P. O’Connell, J. Odermatt, P.R. Polak, A. Powell, D. Seymour, N. Skoutaris, E. Xanthopoulou, A. Yong

1 Introduction: framing the methodology of justice,
injustice and Brexit 1
Tawhida Ahmed and Elaine Fahey
PART I WHOSE AND WHITHER JUSTICE AFTER BREXIT?
2 Lexit and the mystification of political economy 23
David Seymour
3 The legal profession’s responsibility for Brexit 39
Damjan Kukovec
4 The constitutional architecture of injustice 55
Paul O’Connell
PART II BREXIT AND GOVERNANCE
5 The only certainty is uncertainty: risk to rights in the
Brexit process 65
Joelle Grogan
6 ‘The will of the people’: the UK constitution,
(parliamentary) sovereignty, and Brexit 81
Alex Powell
7 Brexit and the siren-like allure of sovereignty 96
Sionaidh Douglas-Scott
8 Brexit, justice and dispute settlement 111
Jed Odermatt
PART III CITIZENS AND VULNERABLE PERSONS
9 Human rights protection as justice in post-Brexit Britain:
a case study of deportation 128
Adrienne Yong
10 Brexit and the balance of free movement and social justice 142
Polly Ruth Polak
11 Will there be justice in healthcare post-Brexit? 158
Sabrina Germain
12 Legal uncertainty, distrust and injustice in post-Brexit
asylum cooperation 175
Ermioni Xanthopoulou
PART IV TERRITORY AND GLOBALISATION
13 The constitutional implications of Brexit for Northern Ireland 190
Luke McDonagh
14 Brexit and transitional justice: Brexit as a challenge to
peacebuilding 205
Nikos Skoutaris
15 Brexit, freedom, and justice: the difficulties of political
constitutionalism with the supranational/global 222
Samo Bardutzky
16 Brexit and international trade: the aspiration of global Britain 238
David Collins
17 The liberal order: holed below the waterline or a ship that
we can rebuild at sea? 253
Joseph Corkin
18 Conclusions 272
Tawhida Ahmed and Elaine Fahey
Index 276
Add to Wish List

Research Handbook on the Sociology of Law