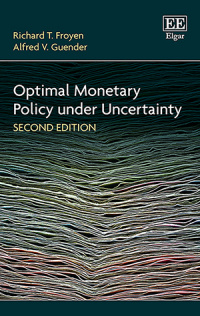 9781784717346 Edward Elgar Publishing
Richard T. Froyen, Professor Emeritus, Department of Economics, University of North Carolina at Chapel Hill, US and Alfred V. Guender, Associate Professor, Department of Economics and Finance, University of Canterbury, New Zealand
Publication Date: 2020 ISBN: 978 1 78471 734 6 Extent: 464 pp
This book provides a thorough survey of the model-based literature on optimal monetary in a stochastic setting. The survey begins with the literature of the 1970s which focused on the information problem in policy design and extends to the New Keynesian approach of the 1990s which centered on evaluating alternative targeting strategies. New to the second edition is consideration of research since the world financial crisis on the role of financial markets and institutions in the conduct of monetary policy.

More Information
Critical Acclaim
Contents
More Information
Casting a wide net in this, their second edition, Froyen and Guender provide coverage of the model-based literature on optimal monetary policy in the presence of uncertainty, with both open- and closed-economy frameworks considered.

The authors have grounded New Keynesian research of the 1990s and 2000s in the literature of the 1970s, which viewed optimal policy as primarily a question of the optimal use of information, and studies in the 1980s that gave primacy to time inconsistency problems. The Global Financial Crisis of 2007-09 led to the recognition that financial markets and institutions required greater attention in policy modelling. Herein, the authors provide a thorough survey of the post-crisis literature that resulted from this recognition.

Researchers in academia and at central banks, students and policy makers will value the wide scope of coverage provided in this examination, leading them to a better understanding of issues such as discretion versus commitment, target versus instrument rules, policy in closed versus open economies and the proper mandate for central banks, including the relationship between interest rate policy and macro-prudential instruments.
Critical Acclaim
‘An opening statement I hear at almost every monetary policy deliberation is “The outlook appears more uncertain than usual”. This statement assumes we usually know where we are starting from, how an economy works, and what the next ‘shocks’ are likely to be. No we don’t, and we never will. This is why the book masterfully written by Richard and Alfred is so important, and able to refreshed and reprinted. For the non-expert reader, admire the scope of material that is considered for a supposedly straightforward policy action. For the expert reader, use this book for insight and build on it for future decision makers’ use. As Governor of the Reserve Bank of New Zealand, I am pleased that monetary policy is a repeat game and that we continue to learn from experience and academic insight.’
– Adrian Orr, Governor of the Reserve Bank of New Zealand

‘In this second edition of Optimal Monetary Policy under Uncertainty, Richard Froyen and Alfred Guender update and extend their lucid exposition of monetary policymaking in a stochastic setting. As in the first edition, the book links past and current research on this broad topic. Thus, the book is useful both for a young researcher who wishes to relate contemporary theories to practical policy issues and for an established scholar who seeks to catch up on recent developments. Particularly useful for all readers are new chapters that explore efforts to better integrate banking and finance into theories of optimal monetary policymaking.’
– David VanHoose, Baylor University, US


Praise for the first edition:

‘In this book the authors provide a comprehensive review of optimal monetary policy in the context of small, log-linear, macroeconomic models that are subject to stochastic shocks. . . I think the book provides a very good introduction to the literature on optimal monetary policy (in short-run models) for non-specialists and students. Some of the content of the book could be used in upper-year undergraduate courses in either macroeconomics or in a specialised monetary economics course. The models are clearly set-out and discussed and there is frequent use of diagrams. The authors spend a lot of time and effort to provide the economic intuition for the models that are presented.’
– Glenn Otto, Economic Record

‘Froyen and Guender have provided a thorough and careful analysis of optimal monetary policy over most of the range of theoretical models that have been used in modern macroeconomics. By providing a comprehensive and clear comparative framework they will help the student of monetary policy understand why there have been conflicting views of what policy makers should do.’
– Central Banking

‘In Optimal Monetary Policy Under Uncertainty, academicians and economists Richard T. Froyen and Alfred V. Guender have collaborated on presenting an informed and informative survey of optimal monetary policy literature arising during the 1970s and 1980s as a ground work for understanding current market and other economic influences on such germane issues as discretion versus commitment, target versus instrument rules, and the delegation of policy making authority within the private and public sectors. With meticulous attention to scholarship and objectivity. . . Optimal Monetary Policy Under Uncertainty is a thoughtful and thought-provoking body of work that is very strongly recommended for professional, academic, corporate and governmental economic reference collections and supplemental reading lists.’
– Midwest Book Review
Contents
Contents: Preface PART I IMPERFECT INFORMATION, RESPONSES TO SHOCKS, AND CREDIBILITY ISSUES 1. Introduction, Part 1 2. A basic model and some early results 3. The strategy of monetary policy: targets, instruments and information variables 4. A variable price level, supply shocks and rational expectations 5. Optimal monetary and exchange rate policy in the open economy 6. Monetary policy credibility PART II OPTIMAL MONETARY POLICY: A NEW KEYNESIAN PERSPECTIVE 7. Introduction, Part 2 8. The Phillips Curve: an evolving concept 9. The forward-looking model: the closed economy 10. The forward-looking model: additional topics 11. The forward-looking model: the open economy 12. The New Keynesian model: the backward-looking case PART III RESEARCH IN MONETARY POLICY since the GLOBAL FINANCIAL CRISIS 13. Introduction, Part 3 14. Money and finance in Keynesian models 15. Rethinking stabilization policy 16. Financial markets since the crisis: a smorgasbord of issues Bibliography Index