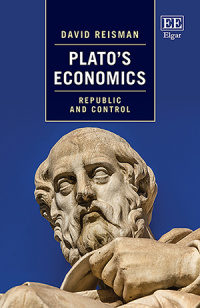 9781839103322 Edward Elgar Publishing
David Reisman, Professor Emeritus of Economics, University of Surrey, UK and Senior Associate, Centre for Liberal Arts and Social Sciences, Nanyang Technological University, Singapore
Publication Date: 2021 ISBN: 978 1 83910 332 2 Extent: 224 pp
Plato was the first of the great thinkers to integrate the economy into a wide-ranging synthesis of ethical absolutes and human interaction. In this original and stimulating book, David Reisman assesses his influential contribution to the political economy of production, consumption, distribution and exchange.

More Information
Critical Acclaim
Contents
More Information
Plato was the first of the great thinkers to integrate the economy into a wide-ranging synthesis of ethical absolutes and human interaction. In this original and stimulating book, David Reisman assesses his influential contribution to the political economy of production, consumption, distribution and exchange.

Drawing on the whole of Plato’s published work, this book explores Plato’s insights into the core philosophical concerns of stability, hegemony, justice and balance. It situates Plato’s economics in the context of fourth-century Athens. It argues that the transition from oligarchy to democracy in the wake of the disastrous war with Sparta had reinforced the attraction of justice, moderation and the middle way to a political philosopher who wanted to reverse the decay in popular standards of right and wrong.

Analytical but accessible, this book is crucial reading for students and scholars of economic and social thought. Researchers and practitioners interested in social and public policy will also benefit from this book’s comprehensive and interdisciplinary approach.

Critical Acclaim
‘Historians of economic thought have traditionally questioned whether the ancient Greek philosophers understood the market system. In this highly perceptive book, David Reisman argues that Plato appreciated how markets could set prices; he just did not make markets the focus of his economics. Rather, Reisman offers a convincing case that Plato employed a broad-based political economy where the market economy was contained within a social economy and a moral economy. Using his prior studies in the history of economic thought, Reisman draws out the parallels and conflicts between Plato and such economic thinkers as Marshall, Veblen and Galbraith to show that Plato still has lessons for the modern world and especially for the post-modern world.’
– Donald Stabile, St. Mary's College of Maryland, US
Contents
Contents: 1. Introduction 2. Justice 3. The divided soul 4. The part and the whole 5. Education 6. Form and philosophy 7. The political order 8. The social cycle 9. The economic system 10. A happy end References Works by Plato By other authors Index
Add to Wish List
eBook for individuals
978 1 83910 333 9
From $40.00
Click here for options
eBook for library purchase
978 1 83910 333 9
View sample chapter and check access on: