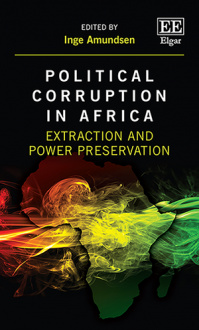 Evaluating seven key case studies, the book illustrates the theoretical basis of corruption and provides a political-economy analysis of the topic, using examples from Sub-Saharan Africa. Outlining how and who is involved, these cases explore the present conditions that enable political corruption. The book highlights how political corruption undermines the political will to curb corruption, a key area that traditional anti-corruption efforts have failed in.

A pertinent and forward-thinking contribution to the field, this will be of interest to those working in anti-corruption, including in aid agencies, national NGOs and government agencies. It will also be useful to development studies, development economics and political theory scholars.

Critical Acclaim
‘I recommend the book, given the engaging delivery of the case studies and the importance of better understanding of African political and administrative realities. There is much to be
learned from this vital text.’
– Christopher Atkinson, International Journal of Public Administration

‘This exciting and timely book takes issue with much of mainstream corruption analysis and especially with the disappointing record of the resulting policy advice, at least in terms of the undiminished incidence of corrupt practices. Focusing on the issue of political corruption, the essays in this collection manage to advance our knowledge about the general theme while providing valuable country studies of some of the highest profile and most intractable of such instances in sub-Saharan Africa.’
– Ricardo Soares de Oliveira, University of Oxford, UK

‘Political Corruption in Africa: Extraction and Power Preservation is a readable book, beautifully edited by Inge Amundsen. It is a major scholarly contribution and is a powerful book, based upon many deeply researched country case studies. A must read for any policy practitioner, investor, activist or scholar needing to understand how political corruption functions in today’s Africa.’
– Alex Vines OBE, Coventry University, UK
Contributors
Contributors: I. Amundsen, K.T. Asante, T. Budhram, M. D’Arcy, B. Dulani, M. Khisa, A. Nuvunga, E.O. Ojo, A. Orre, V. Prusa

2. Political Corruption and the Limits of Anti-Corruption Activism in Ghana
Kofi Takyi Asante and Moses Khisa