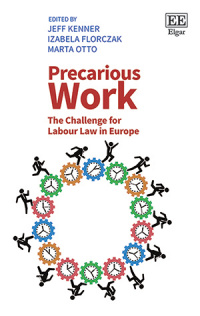 The Challenge for Labour Law in Europe

9781788973250 Edward Elgar Publishing
Edited by Jeff Kenner, Professor, School of Law, University of Nottingham, UK, Izabela Florczak, Assistant Professor and Marta Otto, Assistant Professor, University of Lodz, Poland
Publication Date: 2019 ISBN: 978 1 78897 325 0 Extent: 288 pp
This discerning book provides a wide-ranging comparative analysis of the legal and social policy challenges posed by the spread of different forms of precarious work in Europe, with various social models in force and a growing ‘gig economy’ workforce. It not only considers the theoretical foundations of the concept of precarious work, but also offers invaluable insight into the potential methods of addressing this phenomenon through labour regulation and case law at EU and national level.

More Information
Critical Acclaim
Contributors
Contents
More Information
Precarious work is a current concern throughout Europe as a result of the proliferation of new types of employment related to the gig economy. This timely book, positioned at the intersection between European and national labour law, provides a comprehensive analysis of the legal and social policy challenges arising from this phenomenon.

Since the 2008 financial crisis, there has been an increasing need to respond to the rise of precarious work and the risk it poses to the European model of secure employment and social protection, which this book thoroughly explores. Chapters first consider the theoretical foundations of the issue, before examining the key characteristics and dynamics of employment regulation in Europe related to precarious work, as well as surveying recent judicial decisions. The book demonstrates the potential for improved labour regulation and case law to address the situation both at EU and national level.

Precarious Work will prove invaluable to law, politics, sociology and anthropology scholars with an interest in the phenomenon of precarious labour. Lawyers, policymakers and other practitioners working in this area will also find this book a useful resource.
Critical Acclaim
‘The publication is certainly worth the attention of those readers who want to know the broader perspective of the phenomenon of precarization of employment in Europe.’
– Krzysztof W. Baran, Cooperante

‘This book offers timely commentary on the rise of precarious employment in Europe following the global financial crisis, sovereign debt crises and the rise of “gig economy” work. Covering developments in a diverse range of States, this book offers cutting-edge analysis from leading scholars regarding the causes of contemporary precarity and the challenges posed to regulation of labour markets.’
– Tonia Novitz, University of Bristol, UK

‘The fragmentation and segmentation of the workforce has led to a multitude of forms of precarious work, now with a new face in the digital economy. It is a big challenge for labour law and industrial relations worldwide. This book focuses on Europe, tries to develop a theoretical framework for this very complex phenomenon, analyses brilliantly the development in different EU Member States and confronts it with the patterns of European and international law, thereby showing the burning need for further regulatory concepts: A must for everybody interested in this topic.’
– Manfred Weiss, University of Frankfurt, Germany

Part I Precarious work: towards a new theoretical foundation
1. Precarious Work and Labour Regulation in the EU: Current Reality and Perspectives
Izabela Florczak and Marta Otto

2. Precariat – Next Stage of Development or Economic Predominance in a New Scene?
Barbara Godlewska-Bujok and Andrzej Patulski

5. The Rise of Precarious Work in Spain. The Effects of the Increase in Labour Market Flexibility
Anna Ginès I Fabrellas

7. From Student Work to False Self-Employment: How to Combat Precarious Work in Slovenia?
Darja Senčur Peček and Valentina Franca

8. Precarious Work in Poland. How to Tackle the Abuse of Atypical Forms of Employment?
Łukasz Pisarczyk and Urszula Torbus

9. On the Balance Between Flexibility and Precarity: Atypical Forms of Employment Under The Laws of the Czech Republic
Jakub Tomšej

Part III The Challenge Of The ‘Gig Economy’
10. “Digital Work” in the “Platform Economy”. The Last (But Not Least) Stage of Precariousness in Labour Relationships
Gionata Cavallini and Matteo Avogaro

11. Uber Drivers Are ‘Workers’ – The Expanding Scope of the ‘Worker’ Concept in the UK’s Gig Economy
Jeff Kenner