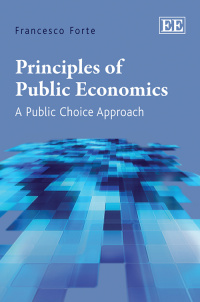 More Information
Critical Acclaim
Contents
More Information
In response to the idea that alternative theories, ideologies and institutions of public economics are unsatisfactory, this important and path-breaking book deals with the principles of economics using a more realistic ‘tempered public choice approach’.

Opening with an introduction on the development of the economic theory of public finance, Francesco Forte develops a discourse based on a theoretical framework of welfare economics. Here, the assumption of ‘homo oeconomicus’ is replaced by that of an average man with imperfect rationality and imperfect ethical constraints, and social welfare functions are replaced by equilibrium solutions in ‘games’ played by contracting parties at constitutional and post-constitutional stages. The positive and normative theory of public goods becomes much more complex, and merit wants are evaluated from an individualistic perspective. Theories of public expenditure, public revenues and the interrelation between various levels of government are also analysed.

The public choice approach combined with theoretical welfare economics and institutions will prove a stimulating and engaging read for those with a special interest in public sector economics, public choice and Austrian economics.
Critical Acclaim
‘A long professional and personal association with Francesco Forte accustoms one to the extraordinary breadth of his knowledge, understanding and original thinking not only on economic but also legal and political questions. Principles of Public Economics displays all these estimable qualities to the full, adding for good measure a style and content that must attract both student and savant alike.’
– Sir Alan Peacock, Heriot-Watt University, UK

‘Francesco Forte has taught public economics and political economy for more than fifty years. He has served as Minister of Finance in Italy as well as a member of the Italian parliament. Forte has lived through and contributed to the development of public finance in a way that few of us can equal. In this text, in which the history of ideas is given a prominent role, Forte offers a thoughtful and at times critical exposition of the field of public economics as a whole.’
– Stanley Winer, Carleton University, Canada

‘Bringing his life-long teaching and research experience in this field to the task, the author offers a comprehensive treatise of public economics that is distinctive in its thoroughgoing public choice approach and its emphasis on real decision-making processes in modern democracy.’
– Viktor J. Vanberg, Walter Eucken Institut, Germany

‘Francesco Forte’s book fits into a great tradition of masterful treatises of political economy in which readers are offered both a relatively informal or reader-friendly presentation of standard material, as in textbooks, and profound analyses and thoughts developed in the course of time or for the purpose by the author himself. A particular strength of the analysis is the way it combines a modern perspective on public economics, understood broadly, and continuity with the contributions of past scholars. This is especially important with regard to the Italian tradition, whose reputation owes a lot to its discovery, at an early stage of his thought, by James Buchanan. Forte’s intimacy with the work of many of the authors belonging to that tradition allows him to demonstrate in many ways its continuing relevance.’
– Pierre Salmon, Université de Bourgogne, France

‘I am a long-time fan of Francesco Forte – as this book indicates, his knowledge is vast (over several languages) and this book fills a gap in the literature. I am surely pleased that you are publishing it. Far too much in the field has become overly technical and thereby divorced from fiscal reality, but Principles of Public Economics really develops a more coherent and general approach and covers the whole spectrum of political systems.’
– James M. Buchanan, George Mason University, US

‘This volume is classic Forte: unconventional and imaginative, erudite and profound, a sure guide to a new understanding and at times to a rediscovery of principles with which one was certain to be familiar. Francesco Forte achieves much of this originality by blending propositions that live in parts of economics and other disciplines that seldom communicate with each other. The volume makes a real contribution to public economics.’
– Albert Breton, University of Toronto, Canada
Contents
Contents: Introduction: Background: Some Aspects of the History of Thought 1. Decision-making Processes and the Structures of Public Finance 2. Individual and Collective Welfare 3. Public Wants and Public Goods 4. Equilibrium and Disequilibrium between Demand and Supply of Public Goods 5. Bureaucracy and Interest Groups 6. The Fiscal Constitution and the Rules Governing the Budget 7. Public Expenditure 8. Public Revenue and the Tax Burden 9. Income Effects and Allocation Effects of Taxes 10. Optimal Taxation in a Public Economy Conforming to the Market Economy 11. Tax Shifting 12. Public Prices 13. Public Debt and Fiscal Policy 14. Supranational, Regional and Local Public Finance Appendix Bibliography Index
Add to Wish List