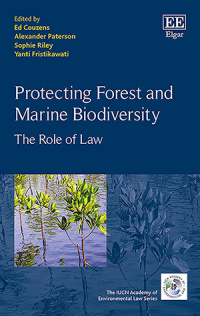 9781789904284 Edward Elgar Publishing
The IUCN Academy of Environmental Law series
Edited by Ed Couzens, Associate Professor, The University of Sydney Law School, Australia, Alexander Paterson, Professor, Institute of Marine and Environmental Law, Faculty of Law, University of Cape Town, South Africa, Sophie Riley, Senior lecturer, University of Technology Sydney, Australia and Yanti Fristikawati, Dean and Lecturer in the Faculty of Law, Atma Jaya Catholic University of Indonesia, Indonesia
Publication Date: 2019 ISBN: 978 1 78990 428 4 Extent: 352 pp
This timely book contributes to discussions on the best legal practices to use to promote conservation, protection and sustainable use of biological diversity in forest and marine areas. The breadth of issues explored across these two themes is immense, and the book identifies both key differences, and striking commonalities between them.