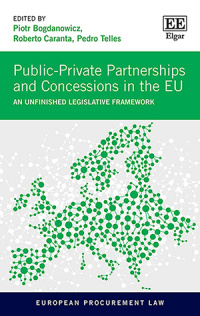 Public-Private Partnerships and Concessions in the EU

More Information
Critical Acclaim
Contributors
Contents
More Information
As public infrastructure, health and other services are being delivered more frequently through Public-Private Partnerships (PPPs) and concessions, this timely book explores these complex contractual arrangements involving cooperation between public and private sectors. It considers how PPPs have become increasingly prevalent following the 2008 financial crisis and examines the applicable legal regimes that are still, to a large extent, unclear to many.

Containing in-depth investigation into EU law and comparative national experiences in relation to PPPs and concessions in 7 EU Member States and the UK, the contributions in this incisive book address the weak points in the current legal regime. Chapters analyse the risks faced by contracting authorities in connection to PPPs and concessions while highlighting good practices from different countries that may be considered for wider adoption across the EU.

Public-Private Partnerships and Concessions in the EU will be a key resource for scholars and students of public administrative law and businesses seeking to procure contracts to create PPPs, as well as being of value to practitioners and policy makers at both EU and national levels.

Critical Acclaim
‘Public-Private Partnerships and Concessions are a crucial tool for organizing public services and delivering much needed infrastructure works. However these instruments and their legal character remain a topic for discussion. This book is therefore timely. The authors discuss the origins, its characteristics and include nine chapters providing country specific in-depth analysis. This book is a must-read for anyone interested in Public-Private Partnerships and Concessions in the European Union. Including subtile convergences and divergences this book illustrates the growing importance of comparative legal research in Europe.’
– Steven Van Garsse, University of Hasselt and University of Antwerp, Belgium

The EU Regulations on the Property Regimes of International Couples