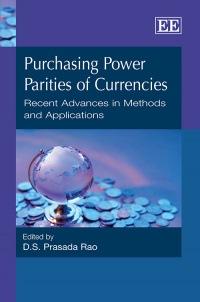 Recent Advances in Methods and Applications

9781845422370 Edward Elgar Publishing
Edited by D.S. Prasada Rao, Professor and Australian Research Council Professorial Fellow, School of Economics, The University of Queensland, Brisbane, Australia
Publication Date: 2009 ISBN: 978 1 84542 237 0 Extent: 424 pp
This up-to-date book demonstrates how the purchasing power parities (PPPs) of currencies are being increasingly used in place of exchange rates for a variety of purposes. These include: comparisons of real income, measurements of global inequality and poverty, calculation of the human development index and assessment of nations economic performance.

More Information
Critical Acclaim
Contributors
Contents
More Information
This up-to-date book demonstrates how the purchasing power parities (PPPs) of currencies are being increasingly used in place of exchange rates for a variety of purposes. These include: comparisons of real income, measurements of global inequality and poverty, calculation of the human development index and assessment of nations economic performance.

Despite the increasing popularity of PPPs, many users have very little appreciation of the data and methods used in their derivation. This timely monograph brings together a number of significant contributions from leading researchers in the field, offering a comprehensive review of the latest methods used in the construction and application of PPPs. The authors provide a broad overview of the current state-of-the-art both in terms of techniques as well as current practice with various international organisations.

Given the increasing application of PPPs in this truly globalised world, this book will be a stimulating read for researchers and academics involved in international comparisons and development economics, general economists and economist statisticians.
Critical Acclaim
‘Perhaps the most significant challenge economists face when comparing economic aggregates across countries is that the data needs to be expressed in a common currency. The use of Purchasing Power Parities (PPPs) to convert national GDP’s into a common currency, for example, is the recognized method to avoid the deficiencies in exchange rates. However, the methodology to produce PPPs is probably the most complex and difficult statistical activity in the world. The recently completed 2005 International Comparison Program (ICP) included 146 countries with huge variations in the size and structure of their economies and covered all components of the GDP. Because of the huge differences in the scope and scale of national economies, the ICP was organized to first produce regional PPPs followed by their linkage to produce global PPP’s. Many of the problems encountered are considered in this book. The list of authors reads like a who’s who in the field of international economic statistics who provide a valuable addition to the knowledge about PPPs. Purchasing Power Parities fits a critical need as it brings together the most recent significant developments to improve the estimation of internationally comparable economic indicators.’
– Frederic A. Vogel, Global Manager, International Comparison Program, 2005 and Consultant, World Bank, Washington, US

‘This book makes a major contribution to the literature on purchasing power parities (PPPs). It is the latest in a flow of important studies which started in 1940. The eminent contributors are mainly concerned with presenting new methods of estimation, rather than new estimates of world performance. Purchasing Power Parities of Currencies contains 13 essays. Most are concerned with complicated problems now at the cutting edge of PPP measurement, with innovative suggestions for sophisticated improvements of present techniques of estimating PPPs. When the World Bank PPP estimates for 2011 emerge, readers of the book will be well equipped to scrutinize its methodological approach with a critical eye.’
– Angus Maddison, United Nations University-MERIT, Maastricht and University of Groningen, Netherlands
Contributors
Contributors: B. Aten, B. Balk, J. Cuthbert, E. Diewert, S. Dowrick, L. Dwyer, P. Forsyth, A. Heston, R. Hill, Y. Kurabayashi, D.S. Prasada Rao, D. Roberts, I. Sakuma, S. Sergeev, M. Timmer, B. van Ark, M. Ward
Contents
Contents: