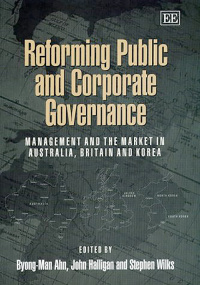 Management and the Market in Australia, Britain and Korea

More Information
Critical Acclaim
Contributors
Contents
More Information
Reform of public sector governance is a well-established global trend, both in government and business, as countries move from traditional bureaucracies to management modelled on the private sector. This book offers a striking and original comparison of recent developments drawing on two of the leading innovators – the UK and Australia, and on one of the classic East Asian administrative systems in Korea. Its novelty lies in the parallel comparison with reform of the governance of the business corporation and the ‘read across’ from change in the private sector to change in the public sector. Also identified are the ways in which the reforms taking place have been influenced by international models.

The authors, all leading academics in Australia, Britain and Korea, base their analyses on original research. The book’s main sections deal with private sector management, privatisation and public enterprises, corporate governance, and government-business relations. Conclusions are drawn regarding possible future policy and changing trajectories of reform as well as about the content, success and extent of national reforms in a global setting.