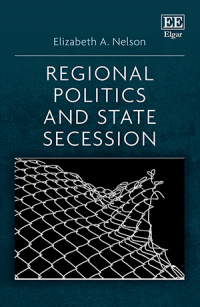 9781839103766 Edward Elgar Publishing
Elizabeth A. Nelson, Assistant Professor, Political Science Department, Manhattan College, US
Publication Date: 2021 ISBN: 978 1 83910 376 6 Extent: 200 pp
While a number of movements seek state secession, the majority never achieves internationally recognized statehood. Paradoxically, some movements that have succeeded have had weaker claims to statehood than many movements that have failed. Regional Politics and State Secession seeks to explain the variation in outcomes for secessionist movements. Why do some movements succeed when so many fail?

More Information
Critical Acclaim
Contents
More Information
While a number of movements seek state secession, the majority never achieves internationally recognized statehood. Paradoxically, some movements that have succeeded have had weaker claims to statehood than many movements that have failed. Regional Politics and State Secession seeks to explain the variation in outcomes for secessionist movements and explores the reasons for why some movements succeed when so many fail.

The author proposes a novel theory of secession based on the politics of the region, with the argument that only those secessionist movements that have the support of regional state and institutional actors will succeed in achieving internationally recognized statehood. Through an analysis of six movements across three regions, this book demonstrates why and how regional actors hold the key to understanding when a secessionist movement will find success.

Critical Acclaim
‘Through a combination of perspectives from international relations, international law, and in-depth case studies, Nelson proposes an innovative argument on the role of regional actors in the success or failure of state secession. This book is essential reading for anyone interested in topics such as sovereignty, the state, and relations between regional actors and global powers.’
– André Guzzi, Fundação Getulio Vargas, Brazil

‘Regional Politics and State Secession is a superb study that elucidates the decisive role of regional actors in determining the success or failure of secessionist movements. By focusing on the role of states in proximity to secessionist movements—their efforts to provide material aid, coordinate diplomatic initiatives, and influence the responses of great powers—Nelson charts a course for a far-reaching reevaluation of the factors that really matter when polities seek statehood. Nelson makes her case with brisk and engaging prose, deftly marshalling evidence from African, European, and Asian cases, in the best tradition of International Relations scholarship informed by nuanced historical analysis. While the path to statehood is Nelson’s focus, her analysis offers a wealth of insights for scholarship around regional rivalry and cooperation, relations among great powers and smaller states, and the politics of diplomacy and civil conflict. In short, this text is essential reading for all of those concerned with some of the most urgent and weighty questions of contemporary international affairs.’
– Sobukwe Odinga, University of California, Los Angeles
Contents
Contents: 1. Introduction to secession in Regional Politics and State Secession 2. The significance of the region 3. Secession in South Asia 4. Secession in the Horn of Africa 5. Secession in Europe 6. Conclusion to Regional Politics and State Secession References Index
Add to Wish List
eBook for individuals
978 1 83910 377 3
From $40.00
Click here for options
eBook for library purchase
978 1 83910 377 3
View sample chapter and check access on: