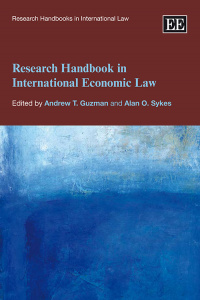 9781847208453 Edward Elgar Publishing
Research Handbooks in International Law series
Edited by Andrew T. Guzman, Dean and Carl Mason Franklin Chair in Law and Professor of Law and Political Science, USC Gould School of Law, University of Southern California, US and Alan O. Sykes, Stanford Law School, Stanford University, US
Publication Date: 2008 ISBN: 978 1 84720 845 3 Extent: 640 pp
This major work consists of carefully commissioned original and incisive contributions from leading scholars in the field of international economic law. Covering a full range of topics, the Handbook provides an accessible treatment of the law in each area, as well as a thoughtful synthesis and discussion of related public policy issues from a broadly social science perspective.

More Information
Critical Acclaim
Contributors
Contents
More Information
This major work consists of carefully commissioned original and incisive contributions from leading scholars in the field of international economic law. Covering a full range of topics, the Handbook provides an accessible treatment of the law in each area, as well as a thoughtful synthesis and discussion of related public policy issues from a broadly social science perspective.

Providing in many cases a unique interdisciplinary blend of analysis, the Handbook offers a cutting edge approach to international economic law, and an authoritative source of reference for scholars, graduate students and policymakers.
Critical Acclaim
‘Students, practitioners and scholars will find the the research handbook most useful in familiarising themselves with the many topics of international trade regulation and economic law. Written by leading experts in the field, it adds a concise and accessible voice to the growing body of highly specialised publications.’
– Thomas Cottier, University of Beirne, Switzerland

‘Undertaking a Research Handbook in International Economic Law is an enormous challenge, and I believe the scholars mobilized for this project have fully met that challenge. The selection of topics is comprehensive, the footnotes and bibliographies are careful and copious, and the writing is lucid, understandable by beginners as well as experts. As I go about revising my own treatise on international economic law, the Handbook will be my constant guide.’
– Andreas F. Lowenfeld, New York University School of Law, US

‘Despite its rather modest title, the book Research Handbook in International Economic Law edited by Andrew T. Guzman and Alan O. Sykes is a remarkable collection which certainly will be welcomed as an important reference and analytical commentary for even those most knowledgeable about IEL. The editors have marshaled authors and co-authors for fourteen different chapters, covering virtually all the crucial subjects under international economic law. These authors are clearly well chosen for their respective expertise which is manifested in each chapter by describing and analyzing specific subject material with a merged perspective of law, economics and political science. However, this is also indeed a “handbook” in providing in accessible form and limited text length a detailed overview of subjects ranging from the essentials of international economics, to roadmaps for understanding the WTO, dispute settlement, investment, finance, competition, telecommunications and many more. The editors’ ambition is truly impressive, and has been admirably realized.’
– John H. Jackson, Georgetown University Law Center, US

‘This book is an absolute gem. It takes the term international economic law seriously. Unlike any other book that I know of, this Handbook transcends the traditional, narrow focus on public trade law to include private commercial law, investment, competition, tax, IP, finance and international environmental law. In 14 comprehensive chapters, the law, policy and economics of 14 different issue areas are covered. Written by absolute leaders in their field, the Handbook offers an entry point for newcomers in each of those subject matters, yet does so at a level of sophistication, insight and comprehensiveness that should equally delight and enrich specialists.’
– Joost Pauwelyn, Duke University School of Law, US
Contributors
Contributors: F.M. Abbott, A. Beviglia Zampetti, M. Fishbein, A.T. Guzman, B. Hoekman, H. Horn, R. Kariyawasam, A. Mattoo, P.C. Mavroidis, R.K. Rasmussen, J.A. Roin, P. Sauvé, H.S. Scott, R.H. Steinberg, A.O. Sykes, J.P. Trachtman, M. Trebilcock, D.P. Wood
Contents
Contents:

8. The Economic Underpinnings of International Taxation
Julie A. Roin