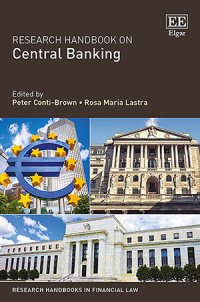 9781784719210 Edward Elgar Publishing
Research Handbooks in Financial Law series
Edited by Peter Conti-Brown, Assistant Professor, The Wharton School, University of Pennsylvania, US and Rosa Maria Lastra, Sir John Lubbock Chair in Banking Law, Queen Mary University of London, UK
Publication Date: 2018 ISBN: 978 1 78471 921 0 Extent: 592 pp
Central banks occupy a unique space in their national governments and in the global economy. The study of central banking however, has too often been dominated by an abstract theoretical approach that fails to grasp central banks’ institutional nuances. This comprehensive and insightful Handbook, takes a wider angle on central banks and central banking, focusing on the institutions of central banking. By 'institutions', Peter Conti-Brown and Rosa Lastra refer to the laws, traditions, norms, and rules used to structure central bank organisations. The Research Handbook on Central Banking’s institutional approach is one of the most interdisciplinary efforts to consider its topic, and includes chapters from leading and rising central bankers, economists, lawyers, legal scholars, political scientists, historians, and others.

More Information
Critical Acclaim
Contributors
Contents
More Information
The Research Handbook on Central Banking focuses on global central banks as institutions and not abstractions, providing historical and practical detail about how central banks work and the challenges they face. This Research Handbook offers the most interdisciplinary treatment of global central banks published to date by addressing key questions regarding where they come from, how they have changed, and the challenges they face during uncertain times.

Divided into two parts, the Research Handbook firstly takes readers on a global tour, covering central banks in the US, Latin America, Europe, Eastern Europe, Japan, China, Africa, and more. In the second part, authors delve into themes of broad application, including transparency, independence, unconventional monetary policy, payment systems, and crisis response. The interdisciplinary mix of contributors include some of the most prominent names in central banking as well as a new generation of scholars who are shaping the conversation about central banks and their role in global politics, economics, and society at large.

Interdisciplinary and innovative, this Research Handbook will prove essential reading for scholars focusing on central banks, financial regulation, global governance, and related areas, as well as for central bankers and employees at central banks.

Critical Acclaim
‘Events during the past century demonstrated the importance of price and financial stability as well as the difficulties of attaining and maintaining them. This book draws together a hugely diverse and rigorous set of analysis to capture what central banks are, have been, and might become. It should prove vital reading for academics, practitioners, and anyone with an interest in central banking.’
– Mark Carney, Governor of the Bank of England

‘The global financial crisis and sluggish recovery has been a defining period for central banks, with the political reaction to the extraordinary steps they took often expanding their responsibilities, while at the same time threatening to constrain their degree of independence in some countries. The broad range of the analysis in this volume – over history, geography, and academic disciplines – is essential reading for anyone who wants to know how central banks got to where they are and provides a solid foundation for thinking about how central banking might evolve going forward.’
– Donald Kohn, former vice chairman of the Board of Governors of the Federal Reserve System and Member of the Financial Policy Committee of the Bank of England
Contributors
Contributors: C. Adam, K. Alexander, A. Berg, R. Bhala, D. Bholat, C. Borio, F. Capie, P. Conti-Brown, R. Darbyshire, F. Decker, B. Geva, C. Goodhart, A.G. Haldane, L.I. Jácome, H. James, J. Johnson, R.B. Kahn, H. Kanda, C. Kaufmann, R.M. Lastra, X. Liu, S. McCracken, E.E. Meade, S.T. Omarova, R. Portillo, M. Raskin, A.L. Riso, R. Smits, P. Tucker, F. Unsal, R.H. Weber, G. Wood, T. Yamanaka, D. Yermack, A. Zabai, Z. Zhou, C. Zilioli

2. Central Banking and Institutional Change in the United States: Punctuated Equilibrium in the Development of Money, Finance, and Banking
Peter Conti-Brown

3. The Development of the Bank of England’s objectives: evolution, instruction, or reaction?
Forrest Capie and Geoffrey Wood

6. The Bank of Russia: From Central Planning to Inflation Targeting
Juliet Johnson

7. Specific Challenges to the People’s Bank of China in a New Wave of Financial Reforms
Zhongfei Zhou

10. A central bank in times of crisis: the ECB’s developing role in the EU’s currency union
René Smits

12. The Reichsbank and the Bundesbank: The Legacy of the German Tradition of Central Banking
Harold James

14. Central Banking in Latin America: Past, Present, and Challenges Ahead
Luis I. Jácome H.

26. The Lender of Last Resort: Regimes for Stability and Legitimacy
Paul Tucker