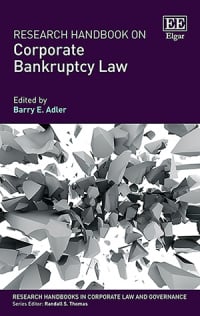 9781781007877 Edward Elgar Publishing
Research Handbooks in Corporate Law and Governance series
Edited by Barry E. Adler, New York University, School of Law, US
Publication Date: 2020 ISBN: 978 1 78100 787 7 Extent: 456 pp
In this Research Handbook, today’s leading experts on the law and economics of corporate bankruptcy address fundamental issues such as the efficiency of bankruptcy, the role and treatment of creditors – particularly secured creditors – in the bankruptcy process, the allocation of going-concern surplus among claimants, the desirability of liquidation in the absence of such surplus, the role of contract in bankruptcy resolution, the role of derivatives in the bankruptcy process, the costs of the bankruptcy system, and the special case of financial institutions, among other topics.

Chapters trace the historical path of both law and policy analysis, with a focus on how the bankruptcy process serves underlying policy objectives. Proposals to reform corporate bankruptcy are presented.

Critical Acclaim
‘Readable and guiding contributions concerning fundamental issues of large group corporate bankruptcies. In Europe, the book will prove equally valuable to lawmakers and scholars with an affection for law and economics policy analysis of the theme.’
– Bob Wessels, Professor Emeritus of International Insolvency Law, Leiden University, the Netherlands and Expert Advisor on Insolvency and Restructuring Law of the European Commission

1. Bankruptcy’s Logic and Limits in the 21st Century: Some Thoughts on Chapter 11’s Evolution and Future
Thomas H. Jackson

4. The New Synthesis of Bank Regulation and Bankruptcy in the Dodd-Frank Era
David Skeel

6. Distress-Triggered Liabilities and the Agency Costs of Debt
Richard Squire

7. On the Mandatory Stay of Secured Creditors in Bankruptcy
Kenneth Ayotte

10. The Treatment of Secured Credit in Bankruptcy: A Unified Model
Michell J. White

12. The Costs of Corporate Bankruptcy: How Little We Know
Stephen J. Lubben

14. Cross-Border Corporate Insolvency in the Era of Soft(ish) Law
John A. E. Pottow

The Interpretation and Value of Corporate Rescue