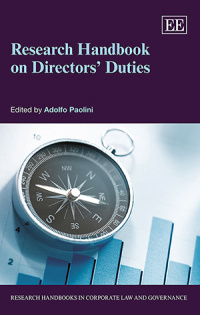 9781781004401 Edward Elgar Publishing
Research Handbooks in Corporate Law and Governance series
Edited by Adolfo Paolini, Senior Lecturer in Commercial Law, University of Buckingham Law School and Consultant, DACBeachcroft LLP, London, UK
Publication Date: 2015 ISBN: 978 1 78100 440 1 Extent: 384 pp
Directors’ duties and liabilities have become the centre of a general legal discussion following the 2008 financial scandal that resulted in global recession. Questions have arisen regarding the ways in which the directors of the world’s major financial institutions have handled their duties and how their decisions have impacted investors, shareholders and consumers. This detailed ƒHandbook discusses the nature of the relationship between a company and its directors, assessing issues such as how duties are discharged, liabilities that may arise and what interests directors should consider before embarking on commercial ventures.

More Information
Critical Acclaim
Contributors
Contents
More Information
The 2008 financial crisis brought increased scrutiny to the ways in which the directors of the world’s major financial institutions handle their duties and how they impact investors, shareholders and consumers. In this comprehensive Handbook, leading scholars from around the world explore the nature of the relationship between a company and its directors, assessing issues such as how duties are discharged, what liabilities may arise and whose interests directors should consider before embarking on commercial ventures.

The Handbook begins with chapters that explore the range of company law developments in several common law countries, with further chapters examining the law in several civil law jurisdictions. The Handbook then looks beyond company law to issues such as the role of directors in fostering corporate social responsibility and directors’ duties to consumers. The final chapters consider directors’ duties in times of financial turmoil.

A comprehensive and ground-breaking book of original scholarly research, the Handbook will be a valuable contribution to the libraries of company law scholars and students, as well as to business people with a professional interest in the topic.

Critical Acclaim
‘If you are professionally involved in, or merely interested in the financial services industry and its collective stance on such issues as social responsibility as well as profit, you should really acquire this absorbing, carefully researched and very timely book.’
– The Barrister Magazine

2. Directors' Duties in Canada: Paintings in a Stream?
Jeff Mackintosh

4. Almost Codified almost 20 years on: The Effect of the Companies Act 1993 on the Development of Directors’ Duties in New Zealand
Susan Watson

7. A Brief Note on Directors’ Duties of Care and Loyalty in Portugal
Pedro Pais de Vanconcelos

PART III: DIRECTORS’ DUTIES BEYOND COMPANY LAW
8. The Limits of Directors' Duties in Fostering Corporate Social Responsibility and the Idea of a Multi-stakeholder Board
S. H. Goo and D. Klingler

9. In Loco Parentis: Directorial Duties to Consumers
Theresa A. Gabaldon

10. Connections between Ethics and Directors’ Duties in Australia
Vivienne Brand

13. The Relationship between Investors and Corporations after the Financial Crises
Anita Anand