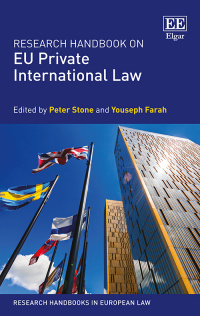 9781788111225 Edward Elgar Publishing
Research Handbooks in European Law series
Edited by Peter Stone, formerly Professor of Law, University of Essex and Youseph Farah, Senior Lecturer in Commercial Law, School of Law, University of East Anglia, UK
Publication Date: 2017 ISBN: 978 1 78811 122 5 Extent: 424 pp
The harmonisation of private international law in Europe has advanced rapidly since the entry into force of the Treaty of Amsterdam. Most aspects of private international law are now governed or at least affected by EU legislation, and there is a substantial and growing body of case-law from the European Court as well as the courts of the Member States. This timely Handbook addresses key questions and problems that currently exist in the rules of private international law laid down by European Union regulations.

Bringing together perspectives from both civil law and common law traditions, the book mainly considers issues relating to the Brussels I Regulation on civil jurisdiction and judgments, and to the Rome I and II Regulations on choice of law in respect of contractual or non-contractual obligations. Weaknesses in the current law are identified, and suggestions are made for possible improvements. The expert contributors focus on currently relevant problems including some issues which have tended to be neglected.

Academics, law students and public officials interested in private international law will find this Handbook to be a valuable resource. Both practising lawyers and commercial lobbyists will also find many useful insights.

Critical Acclaim
‘This collection of substantial and detailed chapters reflects current research on important and topical areas in the conflict of laws, such as Internet transactions, International sales of goods, and privacy. It will be of both use and interest to all practitioners and academics in the area as it provides a detailed analysis, within the political and commercial context, of many of the most complex issues arising out of the Brussels I, Rome I and Rome II Regulations and associated jurisprudence, including the role of non-State law, mandatory rules, and the domicile of companies.’
– Elspeth Berry, Nottingham Trent University, UK

‘This book offers a very timely and exquisite insight into some of the most pressing challenges of EU private international law – itself an area of the law with growing impact on practice, academia, and the further development of EU law generally. Peter Stone and Youseph Farah have gathered a steller team of commentators to guide the reader through some of the intricate mazes of EU conflicts law. A delight.’
– Geert van Calster, University of Leuven, Belgium

2. A Step in the Right Direction! Critical Assessment of Forum Selection Agreements under the Revised Brussels I: A Comparative Analysis with US Law
Youseph Farah and Anil Yilmaz-Vastardis

3. Fairy is Back – Have you got your Wand Ready?
Hong-Lin Yu

4. Frustrated of the Interface between Court Litigation and Arbitration? Don't Blame it on Brussels I! Finding Reason in the Decision of West Tankers, and the Recast Brussels I
Youseph Farah and Sara Hourani

6. Article 4 of the Rome I Regulation on the Applicable Law in the Absence of Choice - Methodological Analysis, Considerations
Gülin Güneysu-Güngör

7. International Sales of Goods and Rome I Regulation
Indira Carr

8. The Rome I Regulation and the Relevance of Non-State Law
Olugbenga Bamodu

11. Defamation and Privacy and the Rome II Regulation
David Kenny and Liz Heffernan