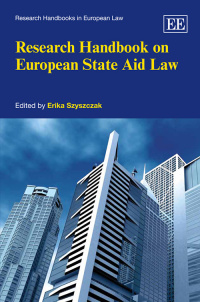 State aid was a neglected area of competition law until attempts to modernise it became central to the Lisbon process 2000 where the aim was to encourage ‘intelligent’ State aid by reducing aid to specific sectors and by making better use of aid for horizontal projects central to EU integration concerns. This policy framework has underpinned the new approach to State aid policy in the EU in recent years and informs many of the chapters in this book. Contributions from leading academics, regulators and practising lawyers, discuss topics devoted to modernisation, problems faced by recent enlargements of the EU, the role of State aid in the fiscal crisis and recession, the role of the private market investor test, regional aid, environmental aid and the review of the Altmark ruling. Perspectives on State aid law and policy from the disciplines of economics and political science are also explored in detail.

Research Handbook on European State Aid Law will appeal to academics, regulators, national and EU government officials, practitioners and postgraduate students who are involved in State aid law.
Critical Acclaim
‘Erika Szyszczak is to be applauded for having assembled a very significant line-up of contributors and contributions in a very well-geared edited collection. . . the reviewer has enjoyed reading this edited collection. . . The book is comprehensive in highlighting the right issues and offering the right mix of high-level/detailed analysis that a complex subject such as State aid requires. As such, this edited collection will certainly be of use to policy-makers, practitioners, and students alike. What is also certain is that it will have a privileged position on my State aid shelf for a long time.’
– Luca Rubini, Yearbook of European Law

‘Erika Szyszczak and the team have come up trumps with a modern comment on state aid and policy. Thank you!’
– Phillip Taylor MBE and Elizabeth Taylor, The Barrister Magazine

‘This fine collection of essays demonstrates in a very articulate way why EU State aid law has taken the centre stage of EU law. In eighteen chapters the reader is provided with a fascinating snapshot of the main issues and developments of the law. The key elements of the EU policy are analysed in a critical way often leading to new insights. In addition the book contains a wealth of material greatly facilitating further research.’
– Piet Jan Slot, University of Leiden, the Netherlands

‘European State aid law needs more self-questioning and more intellectual debate. In my view, this Research Handbook is a very valuable contribution to this necessary process. It correctly identifies the most intellectually problematic issues within State aid law and asks the right questions. This may be due to the balance in the excellent selection of contributors, coming both from the academia and from practice. This guarantees, on the one hand, that the questions are relevant in practice and not purely theoretical but also provides, on the other hand, for a rigorous analytical approach when confronting the issues. The result is a fresh and interesting new look to many of the basic issues of State aid law.’
– José Luis Buendia Sierra, Garrigues, Brussels, Belgium, and King’s College London, UK

4. The Role of Economics in State Aid Analysis and the Balancing Test
Lorenzo Coppi

6. The Intersection between the Market Economy Investor Principle and the One Time-last Time Principle in the Context of Airline Restructuring Operations
Antigoni Lykotrafiti

7. The Great Recession and Other Mishaps: The Commission’s Policy of Restructuring Aid in a Time of Crisis
Christian Ahlborn and Daniel Piccinin

8. The Concept of Selectivity?
Andreas Bartosch

12. The Relationship between State Aid and the Single Market
Andrea Biondi and Martin Farley

14. European Economic Rights and National State Aids Policy in Conflict: The Problem of the Democratic Securing of Welfare
Michelle Everson

17. State Aid and the Role of National Courts
Paolisa Nebbia