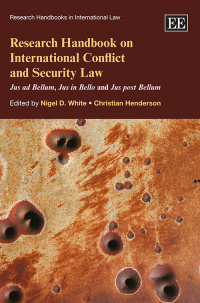 9781783470099 Edward Elgar Publishing
Research Handbooks in International Law series
Edited by Nigel D. White, Professor of Public International Law, School of Law, University of Nottingham and Christian Henderson, Professor of International Law, University of Sussex, UK
Publication Date: 2015 ISBN: 978 1 78347 009 9 Extent: 704 pp
This innovative Research Handbook brings together leading international law scholars from around the world to discuss and highlight the contemporary debate regarding issues of conflict prevention and the legality of resorting to the use of armed force through to those arising during an armed conflict and in the phase between conflict and peace.