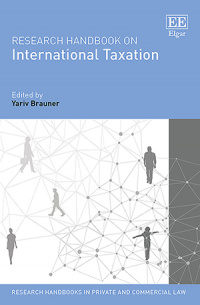 9781788975360 Edward Elgar Publishing
Research Handbooks in Private and Commercial Law series
Edited by Yariv Brauner, Hugh Culverhouse Eminent Scholar in Taxation and Professor of Law, University of Florida Levin College of Law, US
Publication Date: 2020 ISBN: 978 1 78897 536 0 Extent: 416 pp
Capturing the core challenges faced by the international tax regime, this timely Research Handbook assesses the impacts of these challenges on a range of stakeholders, evaluating various paths to reform at a time when international tax policy is a topic high on politicians’ agendas.

Expert international contributors present an array of perspectives and approaches to research in the field, but all consider the necessity of fundamental reforms. The Research Handbook offers a reappraisal of the foundations and core concepts of the international tax regime, highlighting the need to adjust nineteenth and twentieth century solutions to the challenges of the twenty-first century. Chapters look at the challenges of embracing globalization, the interdependence of world economics, the ensuing impossibility of truly unilateral international tax policy, and the need to accommodate the expanding cast of players on the political map.

With a variety of paths to reform suggested throughout, this Research Handbook will prove an invigorating read for law scholars working on taxation law as well as practitioners and policy makers seeking ways to improve, or navigate, the current state of affairs with international tax law.

Critical Acclaim
‘This is an excellent book which includes several thought-provoking analyses. Although the chapters are intended to provide the reader with an “initial reading” necessary for research on the topics, most of these chapters go much further than that. The book explores a wide variety of themes and is not restricted to corporate or tax treaty related ones as are many textbooks on international taxation. This is seen by the reviewer as a strength rather than a weakness—the Research Handbook on International Taxation helps to fill in a gap in the existing literature. Furthermore, the agenda for further research set out in many contributions is likely to prove very useful to those
exploring and challenging the current state of affairs.’
– Christiana HJI Panayi, British Tax Review

‘On showcasing thoughtful researchers, the collection is a tour de force. Brauner is a brilliant curator. Chapters were contributed by scholars in the US, Spain, Canada, Israel, Germany, Brazil, Italy, the UK, Australia, Serbia, Austria, and Poland. The list is not quite half women, but it’s not far from it. And although most of the contributors are distinguished senior scholars – leaders in their fields – there are a few emerging voices that showcase the promise of the field. The world of international tax is exploding with new players and new ideas. The stakes are higher than ever. And so is the need for a Handbook. Especially one this good.’
– Kim Brooks, JOTWELL

PART III KEY DEBATES
9 Competition v. cooperation in international taxation 141
Tsilly Dagan
10 The arm’s length standard: justification, content, and
alternative proposals 153
Luis Eduardo Schoueri and Ricardo Andr. Galendi J.nior
11 Can law regulate its own interpretation? Relevance and meaning of
articles 31–33 of the vienna convention on the law of treaties (VCLT) and article
3 para. 2 of the model convention of the organisation for economic co-operation
and development (OECD MC) for the interpretation of double taxation
conventions 174
Michael Lang
12 International tax treaty dispute resolution, the mutual agreement procedure,
and the promise of mandatory arbitration for developing countries 191
Yariv Brauner