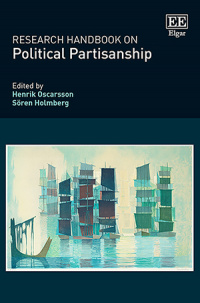 9781788111980 Edward Elgar Publishing
Edited by Henrik Oscarsson, Professor, Department of Political Science, and Research Director of the Swedish National Election Studies (SNES), University of Gothenburg and Sören Holmberg, Senior Professor, Department of Political Science, and former Research Director, SNES, University of Gothenburg, Sweden
Publication Date: 2020 ISBN: 978 1 78811 198 0 Extent: 400 pp
Based on cutting-edge global data, the Research Handbook of Political Partisanship argues that partisanship is down, but not out, in contemporary democracies. Engaging with key scholarly debates, from the rise of right-wing partisanship to the effects of digitalization on partisanship, contributions highlight the significance of political partisanship not only in the present but in the future of democracies internationally.

Featuring contributions from leading scholars, this book is critical for graduate students of political science and sociology, as well as for advanced researchers investigating elections and electorates, voter trends and contemporary political parties. Policymakers and political consultants will also benefit from its insights into the political engagement of voters and the future of party-based democracy.
Critical Acclaim
‘The Research Handbook on Political Partisanship brings new life into one of the oldest concepts of electoral research. Presenting a broad spectrum of theoretical perspectives and empirical analyses, the book is much more useful for present and future research than the literature reviews seen in many other handbooks. An updated understanding of the role of political identification today requires the in-depth discussions of its “two faces”, given in this Handbook. Party identification can be a “helper” and guide in a complex political landscape, but it can also be a “blinder”, barring competing views and preferences. The book argues not only for the need of parties to maintain emotional ties to their voters, but also for the need to keep party identification as an important tool for future students and scholars of political behaviour.’
– Bernt Aardal, University of Oslo, Norway

Handbook on Politics and Public Opinion