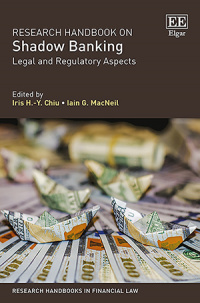 More Information
Critical Acclaim
Contributors
Contents
More Information
In the Research Handbook on Shadow Banking an international cast of experts discusses shadow banking activities, the purposes they serve, the risks they pose to the financial system, and the wider implications for regulators and the regulatory perimeter. Contributors offer high-level and theoretical perspectives on shadow banking and regulatory risks as well as more detailed explorations of specific markets in shadow banking.

With perspectives from the United Kingdom, the European Union, the United States, China and Singapore, this Research Handbook discusses a range of wholesale sector shadow banking activities including the rehypothecation of assets, securitization and derivatives as well as the implications of hedge fund activities for systemic risk. Further topics of discussion include a range of shadow banking activities led by financial and technological innovation, such as online equity and debt crowdfunding, the rise of exchange traded funds, and the emergence of crypto-currencies and distributed ledger technology.

Interdisciplinary, broad and comprehensive in topic, this Research Handbook will prove to be a one-stop resource for legal academics and practitioners as well as for research students and those participating in the financial industry and trade associations.


Critical Acclaim
‘This book is edited by two of the most eminent scholars in financial law. Together with a list of authoritative contributors in their respective fields, this is to date the most definitive book on the subject matter from regulatory perspectives. It is more than a research handbook, it is the "go-to" book on this subject matter with great insights. This research handbook is an outstanding scholarly book for financial law academics and postgraduate research students. If you are a legal practitioner in financial law, the comprehensiveness and profound debates in this single collection of articles about shadow banking makes it a must read!’
– Angus Young, Journal of International Banking Law and Regulation

‘The Research Handbook brings a heavyweight group of contributors to the disparate group of financial activities called “shadow banking”. Under the distinguished editorship of Professors Chiu and MacNeil, it provides an analysis of issues relating to financial regulation, the law and policy-making which is both contemporary and of the highest quality.’
– The Hon. Sir William Blair, Queen Mary, University of London, UK

‘In the ten years since the financial crisis, we have seen a broad spectrum of the functions traditionally performed by banks being taken up by other players. This is one of the most fascinating fields of economics and regulation in the world of financial intermediaries. The book covers the entire spectrum of this new field, both wholesale‎ as well as retail: a truly valuable contribution to this important topic.’
– Katja Langenbucher, Goethe-Universität Frankfurt, Germany

Part I Perspectives on Shadow Banking and the Regulatory Perimeter
1. The Law and Economics of Shadow Banking
Hossein Nabilou and Alessio M. Pacces

10. Out of the Shadow? Promises and Challenges of Peer-to-Peer Lending
Mingfeng Lin