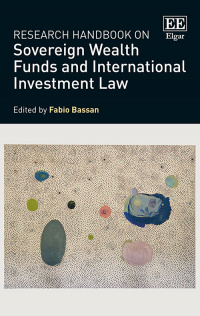 Current research surrounding sovereign wealth funds is focused on investment flows and trends that are grounded in economics, neglecting to consider the role of law and governance in the investigation. From a legal perspective, the Handbook narrates a ‘passive’ side of sovereign wealth funds and state owned companies, exploring how and to what extent the legal constraints imposed by host States act as barriers to investments. Additionally, the ‘active’ side is also discussed and the influence of ethical principles, treaty re-negotiations and sovereign immunity practices on state investments considered.

A comprehensive reference on a complex area of research, the Handbook will be a valuable addition to the library of scholars and students interested in investment law, central banks, international economics and governance.

Critical Acclaim
‘This Research Handbook is quite timely in its broad coverage of most, if not all, main aspects of SWFs, which have become such important players in the international investment arena. Thanks to the contribution of specialists with a diverse background in law, taxation, international economics, relations and governance, this book offers a comprehensive picture of their structure, functions, governance and practices. The analysis includes the impact that SWFs have both in individual host states where they invest and as agents of development in the global economy.’
– Giorgio Sacerdoti, Bocconi University, Italy

PART IV SWF AND REGULATION AT REGIONAL AND NATIONAL LEVEL
6. The Foreign Investment and National Security Act Of 2007: An Assessment of its Impact on Sovereign Wealth Funds and State-Owned Enterprises
Paul Rose