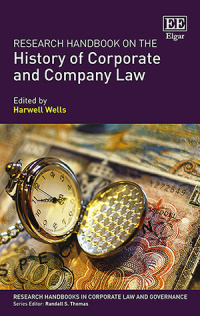 Research Handbook on the History of Corporate and Company Law

9781784717650 Edward Elgar Publishing
Research Handbooks in Corporate Law and Governance series
Edited by Harwell Wells, I. Herman Stern Professor of Law,Temple University, James E. Beasley School of Law, US
Publication Date: 2018 ISBN: 978 1 78471 765 0 Extent: 656 pp
Understanding the corporation means understanding its legal framework, but until recently the origins and evolution of corporate law have received relatively little attention. The topical chapters featured in this Research Handbook, contributed by leading scholars from around the world, examine the historical development of corporation and business organization law in the Americas, Europe, and Asia from the ancient world to modern times, providing an invaluable resource for both further historical research and scholars seeking the origins of present-day issues.

This extensive collection brings together contributions from an array of international academics to provide the first wide-ranging history of the laws of corporations and business organizations from ancient to modern times. The contributors offer a global exploration of the development of corporation and company law, moving beyond the United States and Western Europe to present studies in Mexico, India and China, as well as addressing the trajectory of scholarly debate. Not only do the contributions examine the growth of the law of public corporation, they also address the development of laws governing other business forms.

This Handbook will prove an invaluable resource for corporation law and business scholars, as well as business and legal historians and economists.
Critical Acclaim
‘For anyone interested in the modern corporation this book is invaluable, a real treasure trove. With an admirable breadth and depth of scholarship, it fills a notable gap in the literature on a fundamental aspect of the corporate form. Thoroughly recommended for both scholars and students.’
– Nicholas H.D. Foster, SOAS University of London, UK

‘Historical analysis of corporate law has become something of growth industry lately. The Research Handbook on the History of Corporate and Company Law will no doubt move quickly to the forefront of this burgeoning literature. The essays, each impressive individually, combine to provide a volume that is strikingly wide-ranging, both in terms of the eras covered and the jurisdictions canvassed.’
– Brian R. Cheffins, University of Cambridge, UK

‘The Research Handbook on the History of Corporate and Company Law is especially recommended to faculty and students of graduate programs in business and law. Law libraries and academic libraries should consider purchasing this research handbook.'
– American Reference Books Annual

2. Business Organizations in India Prior to the British East India Company
Vikramaditya Khanna

4. Trading with Strangers: The Corporate Form in the Move from Municipal Governance to Overseas Trade
Ron Harris

9. Change for Continuity: The Making of the Société Anonyme in nineteenth Century France
Jean Rochat

10. Classes of Shares and Voting Rights in the History of Italian Corporate Law
Giulio Sandrelli and Marco Ventoruzzo

11. A History of the Corporation in Spain in the Twentieth Century: Towards Europe
Susana Martínez-Rodríguez

14. The Stakeholder Approach to Corporate Law: A Historical Perspective from India
Umakanth Varottil

17. A History of Canadian Corporate Law: A Divergent Path from the American Model?
Fenner L. Stewart