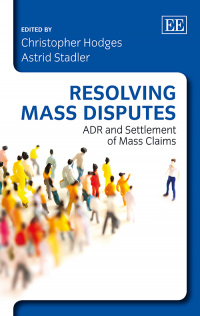 ADR and Settlement of Mass Claims

9781782546900 Edward Elgar Publishing
Edited by Christopher Hodges, Centre for Socio-Legal Studies​ and Wolfson College, Oxford, UK​​ and Astrid Stadler, Professor and Chair in Civil Law, Procedural Law and Private International Law, and Comparative Law, University of Konstanz, Germany
Publication Date: 2013 ISBN: 978 1 78254 690 0 Extent: 336 pp
The landscape of mass litigation in Europe has changed impressively in recent years, and collective redress litigation has proved a popular topic. Although much of the literature focuses on the political context, contentious litigation, or how to handle cross-border multi-party cases, this book has a different focus and a fresh approach.

More Information
Critical Acclaim
Contributors
Contents
More Information
The landscape of mass litigation in Europe has changed impressively in recent years, and collective redress litigation has proved a popular topic. Although much of the literature focuses on the political context, contentious litigation, or how to handle cross-border multi-party cases, this book has a different focus and a fresh approach.

Taking as a starting-point the observation that mass litigation claims are a ‘nuisance’ for both parties and courts, the book considers new ways of settling mass disputes. Contributors from across the globe, Australia, Canada, China, Europe and the US, point towards an international convergence of the importance of settlements, mediation and alternative dispute resolution (ADR). They question whether the spread of a culture of settlement signifies a trend or philosophical desire for less confrontation in some societies, and explore the reasons for such a trend.

Raising a series of questions on resolving mass disputes, and fuelling future debate, this book will provide a challenging and thought-provoking read for law academics, practitioners and policy-makers.
Critical Acclaim
‘Legal systems worldwide are increasingly grappling with the legal and logistic complexities of collective actions and claims. Although the US-style class action contrasts sharply with the European focus on individual litigation, policy-makers throughout Europe are seeking to reduce judicial budgets, to enhance self-reliance through ADR schemes and to introduce new and efficient forms of redress through collective litigation. Meanwhile, the market for justice is becoming increasingly globalised. Thus, a sense of judicial competition between jurisdictions may accelerate a European movement towards new procedures and paradigms in the realm of collective redress. Against this background, this formidable collection of comparative essays on collective redress and ADR is both timely and unique. This book shows viable pathways to ensuring efficient and balanced collective redress. Excellent contributors and editors have jointly succeeded in connecting ADR and collective redress in ways previously considered disparate.’
– Willem H. van Boom, Erasmus University Rotterdam, the Netherlands

‘Resolving Mass Disputes is a timely, informative, and stimulating book. The contributed chapters analyze the phenomena of interest – mass dispute resolution in court-based systems and their alternatives – in numerous countries and the EU, and the insights they afford are nicely drawn together in a comprehensive introduction by the editors, Christopher Hodges and Astrid Stadler. As a result, the reader is enabled to understand and begin to evaluate comparatively the various mechanisms by which a broad array of common law and civil law systems currently resolve mass disputes.’
– Stephen B. Burbank, University of Pennsylvania Law School, US
Contributors
Contributors: I. Benöhr, N. Creutzfeldt, M. Faure, L. Haiqing, D.R. Hensler, C. Hodges, J. Hörnle, J. Kalajdzic, X.E. Kramer, M. Legg, R. Marcus, A. Stadler, I. Tzankova, S. Voet, Z. Wusheng
Contents
Contents:

4. Collective Settlements in the Netherlands: Some Empirical Observations
Ianika Tzankova and Deborah Hensler

5. Settlement and its Pitfalls in England and Wales
Christopher Hodges

13. Online Dispute Resolution in the EU and Beyond – Keeping Costs Low or Standards High?
Julia Hörnle